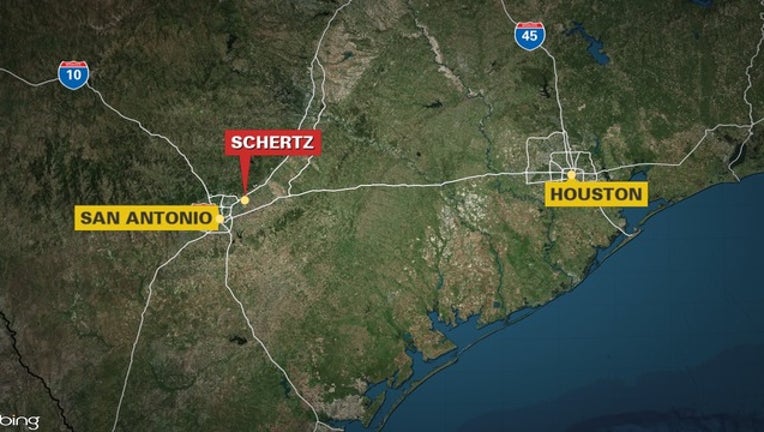 Schertz, Texas (AP) - SCHERTZ, Texas (AP) - Four sheriff's deputies firing at a wanted felon shot and killed a 6-year-old boy when at least one round went through the wall of his San Antonio-area mobile home and struck him, sheriff's officials said.

The woman, sought for offenses including car theft and who was being chased by Bexar County deputies, was attempting to break in to the trailer Thursday afternoon when the shooting happened, Sheriff Javier Salazar said. The woman was shot multiple times and died at the scene. The boy was struck in the torso and taken to a hospital where he was pronounced dead.

The Bexar County medical examiner's office on Friday identified the boy as 6-year-old Kameron Prescott. Sheriff's officials a day earlier had said he was 7.

Authorities have not released the name of the woman. Salazar said she had no apparent connection to the child or his family.

"I can definitively tell you that myself and all the deputies involved, there's not a single one us of that wouldn't trade places with this child," Salazar told reporters late Thursday.

It wasn't immediately clear what prompted the deputies to fire at the woman. No weapon was found on her after she died. One of the deputies who was involved in a two-hour search for the woman said she had earlier pointed a gun several times, Salazar said.

The events unfolded Thursday morning when a man reported that a woman he knew had stolen his car, the San Antonio Express-News reported. Deputies found the woman hiding in the closet of a home where she pointed a gun at them before fleeing on foot, Salazar said. At one point she swam across a creek before running into a wooded area next to the trailer park where the boy lived.

It's not clear if she lost the weapon or discarded it as she was being chased.

Salazar said the woman tried to break into several homes at the trailer park in an effort to evade authorities before she came to the home where Kameron was inside with other family members.

The San Antonio Express-News reports that Kameron was home because his elementary school let out students at noon for the Christmas break.

Anthony Fritcher, 33, told the Express-News that he was closing the back door of his home at the trailer park when the front door was flung open and the woman walked in, demanding the keys to a Kia Soul parked in the driveway. Fritcher, along with others in the home, charged at the woman, who ran outside and out of sight.

This report has been corrected to show the boy who died was 6 years old, not 7.