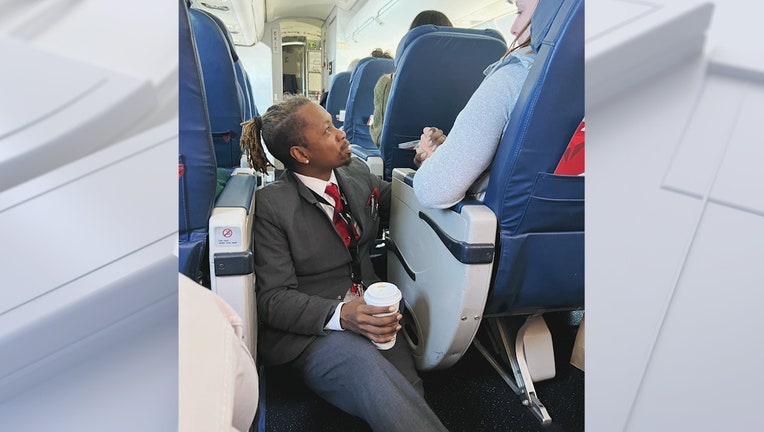 CHARLOTTE, N.C. - For some, flying isn’t really their thing. According to the Cleveland Clinic, about 25 million adults in the U.S. have a fear of flying, or aerophobia.

Knowing this, a Delta flight attendant is warming hearts all over the internet after a viral photo showed him sitting on the floor next to an anxious, crying passenger to comfort her during her trip.

Molly Simonson Lee of Raleigh, North Carolina, snapped the photo that has been shared and liked thousands of times after she posted it on Facebook.

RELATED: Netflix is hiring a flight attendant for one of its private jets—and the job pays up to $385,000

Lee said she took the photo on January 14 during a flight from Charlotte, North Carolina, to JFK Airport in New York.

Passengers left stranded in Orlando after Frontier canceled their flight got together and rented a van to complete the last leg of their trip. (Credit: Alanah Story via Storyful)

She said the passenger was already nervous before the plane departed from the gate.

"When the woman in the photo boarded, she made it clear pretty quickly that she was anxious about flying and hadn't flown in a long time," Lee told FOX Television Stations.

Lee the woman started to become jittery by the routine noises an aircraft makes. That’s when the flight attendant, identified as Floyd Shannon-Dean, came over and told her the reasons for the noises.

"He [Shannon-Dean] also noticed how anxious she was and reassured her that it would be safe and that he was there if she needed anything," Lee added.

Even later in the flight, at a point when many nervous passengers normally become more at ease, Lee said it only got worse for the woman.

"About midway through the flight, she had tears streaming down her cheeks," Lee continued.

Lee said that’s when Shannon-Dean did the most remarkable thing.

"He quickly and calmly came and sat down and took her hand," she added.

Lee said Shannon-Dean started talking to the passenger and sat on the floor, in the aisle, for about five to 10 minutes until the anxious passenger calmed down.

The touching gesture must’ve worked as the passenger started to calm.

"She was laughing with her seatmates and seemed to be fully composed after their interaction," Lee explained.

"With everything flight crews have to deal with and how hard they work, I thought it was incredible that he was spending so much energy to go above and beyond when he didn't have to," Lee said. "To see someone being so kind and warm to a stranger, especially when there was no obligation to do anything, was really moving to me."

"He quickly and calmly came and sat down and took her hand," Lee said.

Lee said she spoke with Shannon-Dean after the flight and told him about the photo she took and eventually shared.

She only hopes things are looking up for Shannon-Dean.

"I hope there is a second chapter to this where we find out that Floyd was promoted and/or got a raise because his actions should be appreciated!" Lee said.

"We are touched by the kindness shown by this flight attendant, working on a Delta Connection flight, and proud that this humanity is displayed by our people every day," the airline said in a statement to FOX Television Stations. "Delta and its partners are dedicated to embodying warmth and care – the Delta Difference –  to ensure our customers enjoy a premium overall experience."