The Dallas Independent School District will require masks for everyone on its campuses, despite Gov. Greg Abbott’s executive order.

DALLAS - The Dallas Independent School District will require masks for everyone on its campuses, despite Gov. Greg Abbott’s executive order.

Superintendent Dr. Michael Hinojosa made the announcement Monday morning, citing concerns about a surge in COVID-19 cases. He feels the crisis is urgent and that he must act in the best interest of the district.

"On June 18 when we ended school, there were only 103 new cases in Dallas County. Currently, as of last Friday, there are 820 new cases. More importantly, medical professionals at UT Southwestern project that by Aug. 23 we will have 2,000 new cases per day," he said. "And as the superintendent of the second-largest district in Texas, I'm responsible for everything, most importantly, the safety of our students and staff and families. I need to implement whatever safety protocols I feel are in the best interest of our school district."

Hinojosa also cited Dallas County's red zone status, a color-coded warning system the county uses to provide guidance on public activities. Now, it is at its most restrictive level.

The superintendent also said he's concerned kids under the age of 12 don't qualify for the COVID vaccine.

Superintendent Michael Hinojosa announces why Dallas ISD will enact a mask mandate for all people on campuses, even though Gov. Greg Abbott has banned such a move.

"Over the weekend, we just got to this point where I felt now we're an urgent crisis," he said.

The mask order is temporary, but Hinojosa recognized that there may be legal challenges or fines associated with his decision. Abbott's order imposes a $1,000 fine for violations.

The superintendent said he is willing to pay whatever fines the district incurs out of his own pocket.

"That executive order is very loose, according to our attorneys," he said. "But I'd rather face that consequence of having to pay some money than to be getting further behind with these students."

Dallas ISD is the largest school district in the state to defy the governor's order. 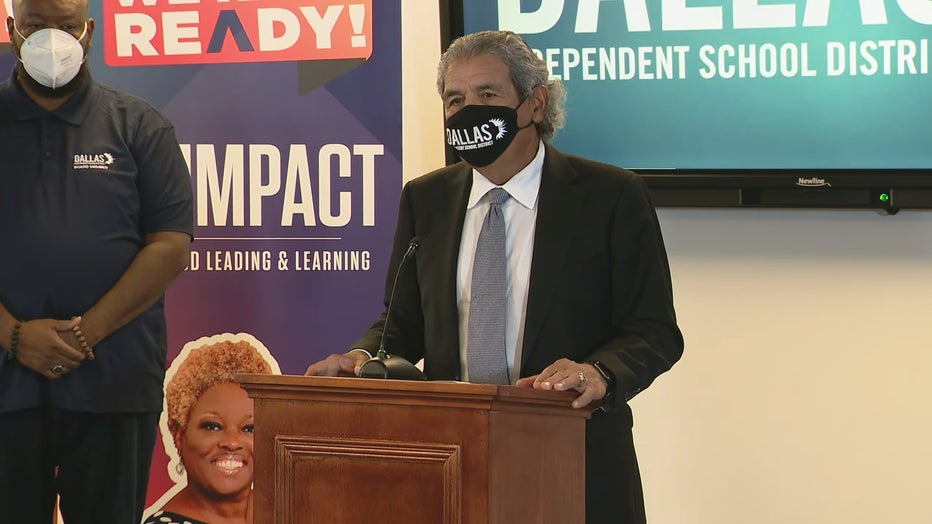 Austin ISD followed by announcing its mask requirement hours later and the Houston ISD superintendent will present a similar proposal to his school board next week.

All Catholic schools in the Diocese of Dallas will require masks but those schools do not fall under Gov. Abbott's order because they do not get state funding.

Hinojosa said he hopes all DISD students will voluntarily comply. He said those who don't will face what he calls "progressive disciplinary action."

"And what are those consequences? My team is working with me right now about how we do that," he said.

The new mask mandate goes into effect on Tuesday.

The superintendent calls the mask mandate temporary, but the decision could end up inside a courtroom.

SMU Constitutional Law Professor Dale Carpenter said Dallas ISD has several arguments if this action ends up in a courtroom.

On the opposing side, Carpenter believes a parent opposing Dallas ISD’s mask mandate might sue the district.

"I assure you, whoever loses at the lower court level will attempt to go to a higher court," he said. "And that would involve a Texas Appellate Court or ultimately, perhaps, the Texas Supreme Court."

However, Carpenter said a court doesn’t have to intervene at all.

"A court can simply say this isn’t an emergency. There’s nothing harmful to you about having to wear a mask for a few days or a few weeks," he said.

It’s unclear if it’s a daily fine or even a per-person fine. The order does say there is no jail time for violating the order.

Dallas ISD is also looking at options for offering virtual learning without state funding and a plan that incentivizes vaccines.