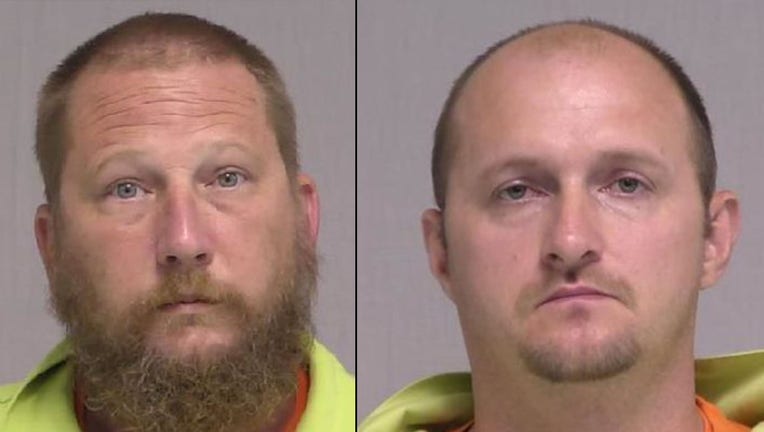 The Nassau County Sheriff’s Office in Florida said William Hale, 35, and Frank Allison, 43, have both been charged after the road rage incident on Saturday, Oct. 8, which lasted for "several miles" and spanned two counties.

Sheriff Bill Leeper said authorities began receiving calls that day a little after 6 p.m. with reports of people being shot at.

One witness told deputies he called 911 after seeing two drivers, one in a black Dodge Ram and the other in a gray Nissan Murano, drive so erratically that he thought something bad was going to happen. He described the drivers’ behavior as a "cat and mouse game."

At one point, the vehicles were alongside each other and Leeper said someone in the truck rolled down a window and began shouting at the Nissan to pull over. A passenger in the Nissan then flicked off the people in the truck.

Then, someone in the truck threw a plastic water bottle into an open window of the Nissan.

That’s when, according to Leeper, Allison grabbed his gun and fired one shot at the truck before speeding off. Leeper said Allison told police the reason he fired his gun was to get out of the whole situation.

The bullet from Allison’s gun hit a 5-year-old girl in the leg, and, when Hale realized his daughter had been shot, he began speeding again to catch back up with the Nissan.

Hale also pulled out a gun and fired seven or eight rounds in the direction of the Nissan. Leeper said three of the bullets hit the car, with one hitting a 14-year-old girl in the backseat. The bullet hit her in the back, causing a collapsed lung.

Leeper said the incident eventually came to an end when the two drivers came across a patrol car and pulled over. The men got out and started arguing with each other and the deputy broke up the fight.

The two girls were taken to the hospital and both injuries were not life-threatening, Leeper said.

Allison and Hale were both arrested and charged with attempted murder. Leeper said they’ve both been released on bail.

"What is scarier than one crazy driver with a gun? Two crazy drivers with a gun," he ** said as he turned over the drivers’ respective booking photos.

"Thankfully, no one was killed in this incident but it could’ve very easily turned out that way because two people were acting stupid and let their tempers get the best of them. It could’ve been two dead kids because of two stupid grown men."

This story was reported from Detroit.