According to ESPN, the cheerleaders said they saw Richard Dalrymple, the Cowboys' longtime senior vice president for public relations and communications, standing behind a partial wall in their locker room as they undressed during an event at AT&T Stadium in 2015.

ARLINGTON, Texas - The Dallas Cowboys reportedly paid a $2.4 million settlement to four its cheerleaders over voyeurism allegations they made against a senior team executive.

According to ESPN, the cheerleaders said they saw Richard Dalrymple, the Cowboys' longtime senior vice president for public relations and communications, standing behind a partial wall in their locker room as they undressed during an event at AT&T Stadium in 2015.

Dalrymple reportedly got into the locker room using a security key card and was seen by cheerleaders recording them with his phone as they were changing clothes.

Dalrymple reportedly claimed he didn't know there were women in the cheerleaders' locker room when he went in and left right away, but the cheerleaders continued with their accusations of voyeurism.

He was also accused of taking upskirt photos of Charlotte Jones Anderson, who is a senior vice president for the Cowboys and Jerry Jones’ daughter, in the Cowboys' war room during the 2015 NFL draft.

FOX 4 reached out to Dalrymple, who reported his retirement to the Dallas Morning News earlier this month, but he referred us to his attorney. 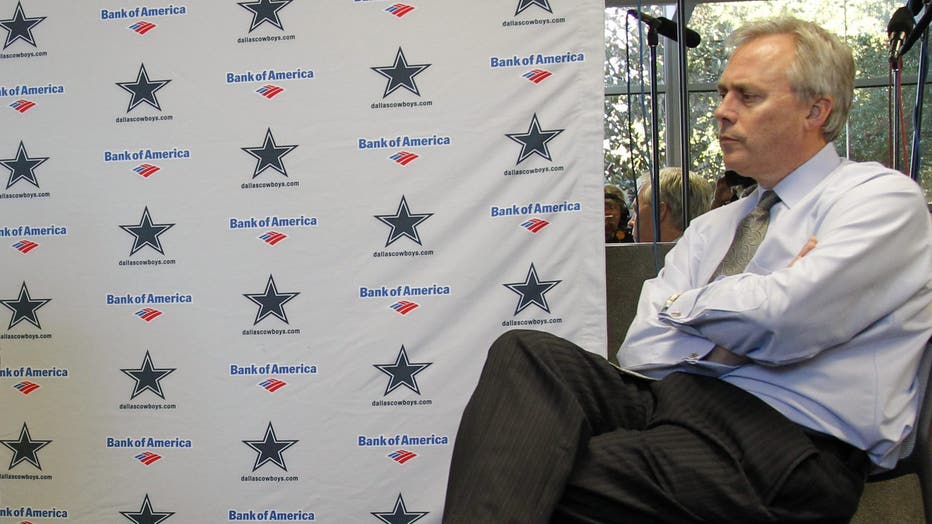 When asked for comment on these allegations, Cowboys spokesperson Jim Wilkinson said they were "thoroughly" investigated and "found no evidence of wrongdoing." He added that Dalrymple would have been fired if any wrongdoing had been found.

"The most basic common sense tells you that if Jerry Jones believed in any way that someone had even remotely done something like that to any member of his family, that person would have been fired immediately," Wilkinson said.

Amy Davis is an attorney not associated with the case but has an expertise in labor and employment law.

"Kudos to these Dallas Cowboys cheerleaders for being brave and speaking out about something that was very serious," she said. "Employers have two duties. They have a duty to have a policy that will prevent these types of things, and then they have a duty to act promptly when something like this is brought to their attention."

The team said it later brought in a forensics firm to ensure he hadn’t deleted any images.

ESPN also reports right after the incident, "the cheerleaders immediately reported what had happened to a security guard. Three people said the security guard wanted to report the incident to the Arlington Police Department."

However, it does not appear police were ever looped in.

Arlington police tell FOX 4 that it doesn’t appear they were ever contacted about the allegations.

Davis says employers are not always required to notify police of incidents.

"There are some gray areas — and frankly I think this may fall into that gray area — when you are talking about workplace safety or violence in the workplace," she said.

The cheerleaders would eventually obtain outside counsel.

Fort Worth attorney Kelly Puls declined to comment Wednesday, given it’s a confidential matter. However, he did not deny the accuracy of the reporting.

A house oversight committee is currently looking into the NFL’s handling of the Washington Commanders’ workplace culture investigation. Employees within the organization have alleged sexual harassment and improper conduct.

ESPN reports that after the incident, the team reconfigured key card access to locker rooms for all staff, added cameras and signs to alert security staff when locker rooms were in use.