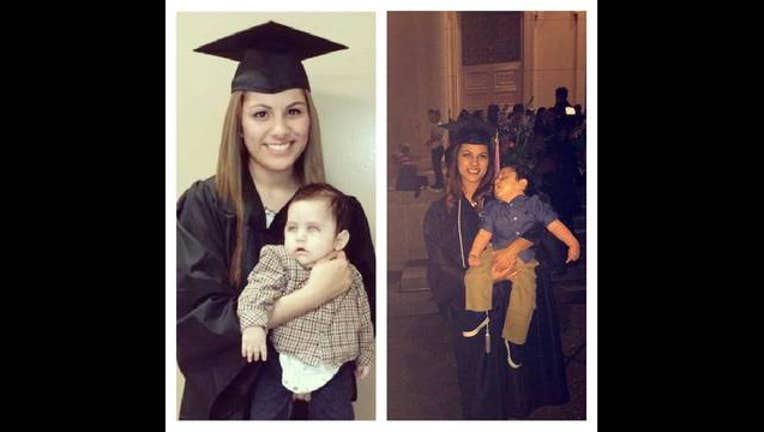 PHILADELPHIA, PA (WTXF) - A viral photo of a graduating mother, Jelina Latrice, has touched many hearts, and has been shared by over 55,000 people.  After we shared her story on the FOX 29 Facebook page, thousands of comments began to roll in.  Jelina’s story inspired Lillian Garcia, another mother who was also finishing courses, to comment on the photo and share her story.

Lillian is a 20-year-old mother living in Fort Worth, TX with her son Jaiden Isaiah.  She became pregnant her junior year of high school at the age of 17, but still managed to graduate in 2014.

In her fifth month of pregnancy, she learned that something was wrong with her son, but doctors weren’t able to detect the problem until after Jaiden was born.

When she finally gave birth to Jaiden, she learned that he couldn’t eat through his mouth, and he needed a gastrostomy button at only two weeks old.

Isaiah is almost three-years-old now, and he has endured various health issues and surgeries, including over six eye surgeries for his crossed eyes.

Jaiden has muscle problems in his cheeks, so Lillian has never seen her son smile or talk, but she can still communicate with him.  However, communication will be easier after Isaiah gets cochlear implants soon to help correct his deafness.

Lillian became a medical assistant in 2015, but nursing is her true dream.  Jaiden has been her motivation through it all, and has inspired her to follow her dream to become a pediatric nurse.

“Jaiden has been my whole motivation; all of this I do is for him. I couldn't possibly be more thankful to God for letting me keep my baby after all the rough times. I love my son more than anything in this world,” said Lillian.