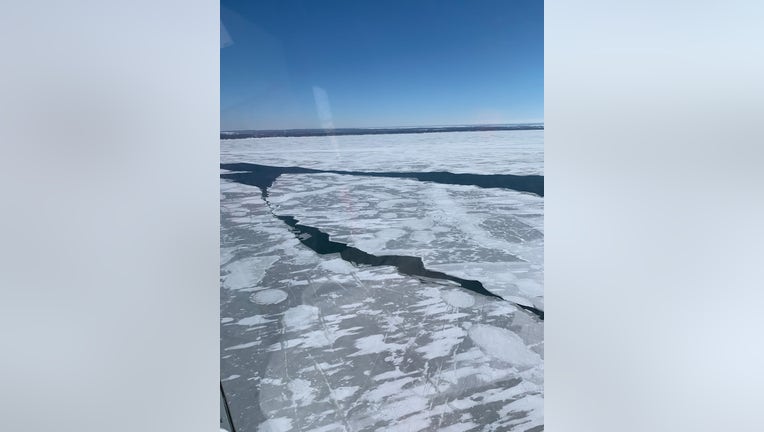 18 people were rescued after being trapped on an ice sheet in Lake Erie. (Credit: Ninth Coast Guard District)

SANDUSKY, Ohio - The U.S. Ninth Coast Guard said 18 people have been rescued after being trapped on a floating ice sheet in Lake Erie Sunday.

Authorities said the rescue was made possible with a Coast Guard helicopter from Air Station Detroit, an airboat from Station Marblehead and a boat from a good Samaritan.

The incident happened near Catawba Island.

Authorities said the rescue efforts started about 1 p.m. local time after an MH-65 Dolphin helicopter from Air Station Detroit noticed approximately 20 people on an ice floe, with several ATVs looking for a route back to land.

The helicopter then lowered its rescue swimmer and begin hoisting operations. The helicopter rescued seven people, while the Coast Guard airboat rescued four people and the good Samaritan was able to rescue the remaining seven.

First responders were on standby but no one required medical attention, authorities said.

Authorities said the ice broke off as people were snowmobiling.

The Coast Guard is reminding people to take precautions before seeking recreational opportunities as well as dressing appropriately for the water, not air, temperature. They also remind people to wear a life jacket, have some form of electronic communication and carry icepicks or screwdrivers to break the ice in the event of a self-rescue.

"There’s no such thing as safe ice, but people can mitigate their risks,"Lt. j.g. Jeremiah Schiessel, from Coast Guard Sector Detroit, said in a statement to FOX Television Stations. "Always be sure to tell someone where you’re going and when you expect to be back. Great Lakes ice is unpredictable, and conditions can change fast."