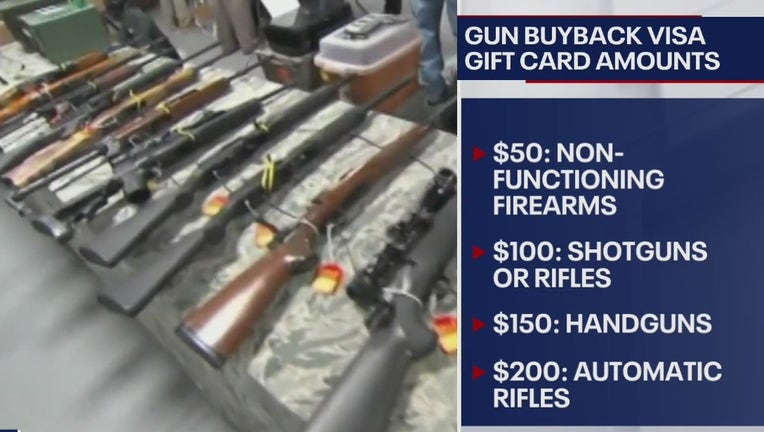 HOUSTON - The city of Houston is holding a gun buyback program this weekend in hopes of slowing down gun violence.

The city’s first gun buyback event is scheduled for Saturday, July 30, from 8 a.m. until noon at Wheeler Avenue Baptist Church.

"Anything anybody can do to reduce the number of guns," said Commissioner Ellis. "Even people who like their guns, if you have too many or if you have one you want to get rid of, turn it in."

The $1 million gun buyback program is part of the city’s One Safe Houston initiative.

Houston Mayor Sylvester Turner says the plan to reduce crime, called the 'One Safe Houston' plan, is working as the city is reporting a decrease in homicides.

On Thursday, we met with people across Houston to see if they think the gun buyback program will help.

"Something is better than nothing," said one person. "At least [they’re] trying."

"You hear me laughing, right?," said Glenn Washington. "Seriously think about that. The people out here committing crimes, the gang bangers, the ones who actually need their weapons taken from them, they’re not going to turn them in for a gift card."

"That will work," said another Houston resident. "A lot of people might surrender and give up their weapons for $50. That’s a good idea."

Houston leaders plan to give out Visa gift cards in exchange for firearms at Saturday’s event. According to officials, they will give $50 cards for each non-functioning gun, $100 for shotguns or rifles, $150 per handgun, and $200 cards for automatic rifles.

We asked Commissioner Ellis to respond to people who think the plan possibly won’t work, because citizens might not want to return guns and lose money.

"I’d say so those people, get over it," said Ellis. "You do have some people who are just caught up in the politics of it. People who are serious about trying to do something [about gun violence], will look at this gun buyback as part of the solution."

Officials say they will buy the unloaded firearms from people, no questions asked.