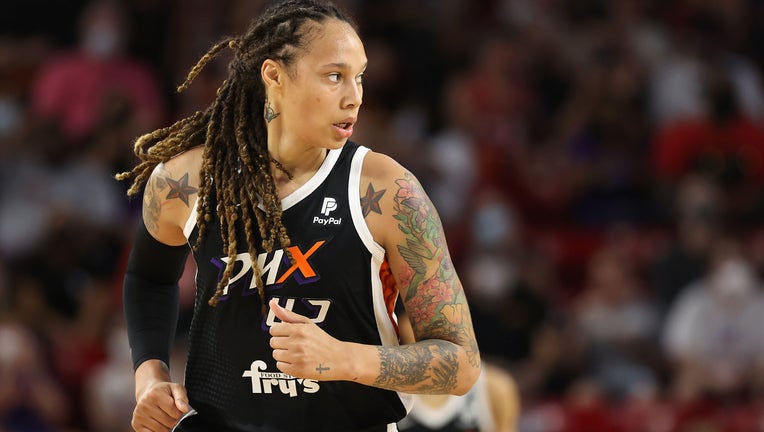 TEMPE, ARIZONA - OCTOBER 03: Brittney Griner #42 of the Phoenix Mercury during Game Three of the 2021 WNBA semifinals at Desert Financial Arena on October 03, 2021 in Tempe, Arizona. The Mercury defeated the Aces 87-60. (Photo by Christian Petersen/G

HOUSTON - Efforts are continuing to free Houston-native and WNBA all-star Brittney Griner from Russian detention. She was taken into custody, before the invasion of Ukraine, as she entered the country to play basketball and is now accused of smuggling hashish-oil into the country.

A court there extended her arrest through mid-May, pending an investigation.

RELATED: Phoenix Mercury's Brittney Griner to be detained in Russia until May: report

The Russian government has said little about the matter. A photo of Griner, in police custody, and shown by Russian media in early March, is the last public image of her.

Security video from a customs station in Moscow shows security agents going through her luggage after Russian authorities say a drug dog alerted them to look.

Since the news broke, Houston Congresswoman Sheila Jackson Lee has been among those calling for Griner's release.

"Please allow Ms. Griner to safely leave, allow her legal representation to handle her matters," she said on March 5.

Former diplomat Richard Sindelar says he is unsure whether calls for Brittney Griner's well-being will be heard in Russia while the state remains at war in Ukraine.

"Brittney Griner has now become a political pawn," he says.

While he says public pressure is unlikely to 'hurt' matters, Sindelar says he is more concerned that U.S. Embassy representatives have been unable to meet with Griner in direct violation of international agreements.

A person close to the situation does tell FOX 26 that Griner is 'OK,' and that her Russian legal team has seen her multiple times a week over the course of her detention. Sindelar says that may be the best Griner's supporters can hope for, in the absence of a deal with Russia to release her.

"I don't know what they're going to gain out of it unless, and until, things in Ukraine sort themselves out, or they use it as a lever on sanctions to release her," says Dr. Sindelar.

He also notes the Russian justice system operates much differently than ours and that proceedings could take some time. A bigger complication, he says, is that Russian courts have been ordered to clear their dockets, presumably to deal with the cases of so-called 'traitors' that Vladimir Putin has accused of undermining the country. Such a delay could push Brittney Griner's case far to the back of the line.