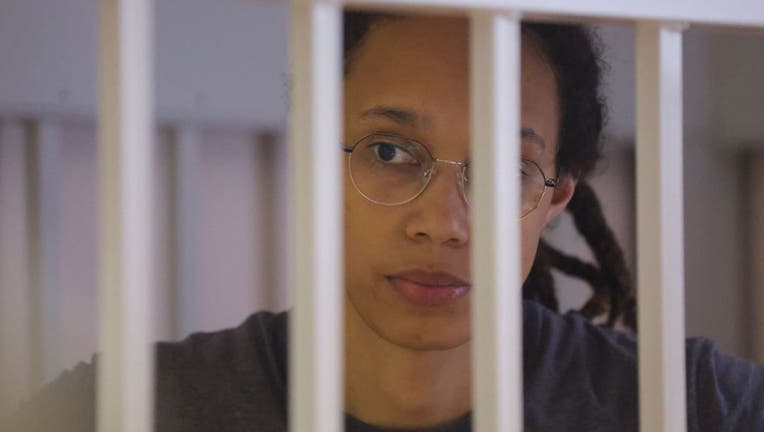 US Women's National Basketball Association (NBA) basketball player Brittney Griner, who was detained at Moscow's Sheremetyevo airport and later charged with illegal possession of cannabis, waits for the verdict inside a defendants' cage before a cour

WNBA star and two-time Olympic gold medalist Brittney Griner will appeal her nine-year prison sentence in court on Tuesday, but according to her legal team, she’s "not expecting any miracles."

Griner will attend the appeal via video link and will likely receive a verdict that same day, her attorneys Maria Blagovolina and Alexander Boykov said.

"She is very nervous waiting for the appeal hearing. Brittney does not expect any miracles to happen but hopes that the appeal court will hear the arguments of the defense and reduce the term," they said in a statement, via Reuters.

Griner was arrested at Sheremetyevo Airport in Moscow on Feb. 17 after Russian authorities said she had vape canisters with cannabis oil inside her luggage. On Aug. 4 she was given a nine-year sentence after pleading guilty, arguing that she had been prescribed cannabis for her pain and inadvertently packed it.

A successful appeal is unlikely in Griner’s case, but the White House continues its efforts for a potential prisoner swap.

National Security Council coordinator John Kirby said in September that Russia has not responded to the "substantial proposal" the U.S. offered back in July, a deal that includes former U.S. Marine Paul Whelan.

"We want them to accept it, frankly, these two individuals ought to be home anyway, period. But we understand that that's probably going to have to be the result of the negotiating process, one that we're willing to participate in honestly and fully, and we've been doing that. And we await them to take the offer that's on the table."

Oct. 17 marked eight months in Russian detention for Griner. The following day was her 32nd birthday.

"Thank you everyone for fighting so hard to get me home. All the support and love are definitely helping me," Griner said in a statement through her agent at the time.