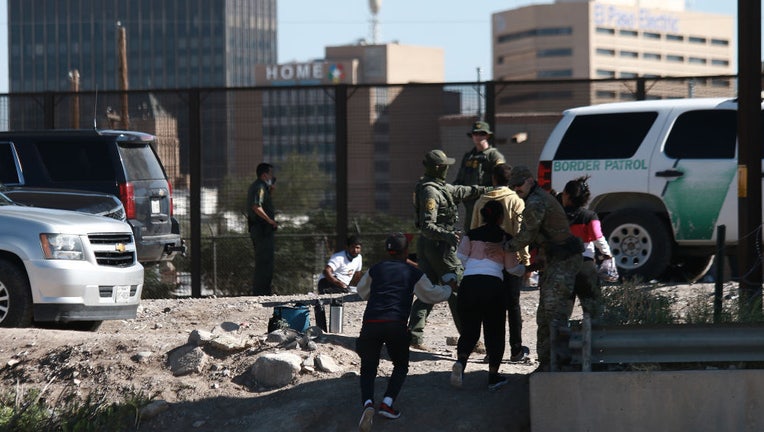 SAN DIEGO - The number of Venezuelans taken into custody at the U.S. border with Mexico soared in August, while fewer migrants from Mexico and some Central American countries were stopped, officials said Monday.

Venezuelans surpassed Guatemalans and Hondurans to become the second-largest nationality after Mexicans among migrants crossing the U.S. border illegally. U.S. authorities stopped Venezuelans 25,349 times in August, up 43% from 17,652 times in July and four times the 6,301 stops recorded in August 2021.

At the same time, it was the third straight month that fewer immigrants from Mexico and Central America’s Northern Triangle countries of Guatemala, El Salvador and Honduras. Those nationalities have dominated the mix for decades.

Authorities stopped migrants 2.15 million times from October through August, the first time that measure topped 2 million during the government's fiscal year beginning Oct. 1. It was a 39% increase from 1.54 million stops the same period a year earlier.

Border crossings have been fueled partly by repeat crossers because there are no legal consequences for getting expelled under a pandemic-era rule that denies a right to seek asylum. Even so, the numbers are extraordinarily high.

RELATED: Uber drivers aiding transport of illegal immigrants from border to US interior

While no single reason can be pinpointed, it is extremely challenging for the U.S. to expel migrants from Venezuela, Nicaragua, and Cuba under the pandemic rule known as Title 42, which U.S. officials invoke to deny people a chance at seeking asylum on grounds of preventing the spread of COVID-19. U.S. relations with all three countries are strained, making it difficult to send them home.

"Failing communist regimes in Venezuela, Nicaragua, and Cuba are driving a new wave of migration across the Western Hemisphere, including the recent increase in encounters at the southwest U.S. border," said Chris Magnus, commissioner of CBP, which oversees the Border Patrol.

Mexico accepts migrants expelled under Title 42 if they are from Guatemala, Honduras or El Salvador, in addition to Mexico. While the pandemic rule applies to all nationalities in theory, people from those four countries are most affected.

The Biden administration is leaning on other countries in the Americas to absorb more people fleeing their homes.

About 6.8 million Venezuelans have left their homeland since an economic crisis took hold in earnest in 2014 for the country of 28 million people. Most have gone to nearby nations in Latin America and the Caribbean, including more than 2.4 million who are in neighboring Colombia.

Venezuelan migration to the U.S. plummeted early this year after Mexico introduced restrictions on air travel but has increased in recent months as more come over land through the notoriously dangerous Darien Gap in Panama.

RELATED: 2 buses of migrants dropped off outside VP Harris’s residence near Naval Observatory in DC

Nearly 7 of every 10 stops of Venezuelans crossing illegally during August occurred in the Border Patrol's Del Rio, Texas, sector, making it the busiest of the agency's nine sectors on the Mexican border. Migrants were stopped more than 52,000 times in the Del Rio sector, many of them around the city of Eagle Pass, with El Paso, Texas, a distant second with about 29,000 stops.

The trend of more Venezuelans is reflected in daily headlines. Roughly 50 migrants that Florida Gov. Ron DeSantis flew to the upscale Massachusetts island of Martha's Vineyard were all Venezuelan, as were five of the six people whom U.S. authorities found drowned in the Rio Grande near Eagle Pass in early September. The sixth was from Nicaragua.

Title 42 encourages repeat attempts because there are no legal consequences for getting caught. In August 157,921 migrants crossed at least once, with 55,333 from Venezuela, Cuba and Nicaragua and 56,979 from Mexico or the Northern Triangle countries.

This story has been clarified to reflect that the figures from the U.S. government show fewer Cubans and Nicaraguans were stopped in August than July, but that migration from those countries is still much higher than last year.