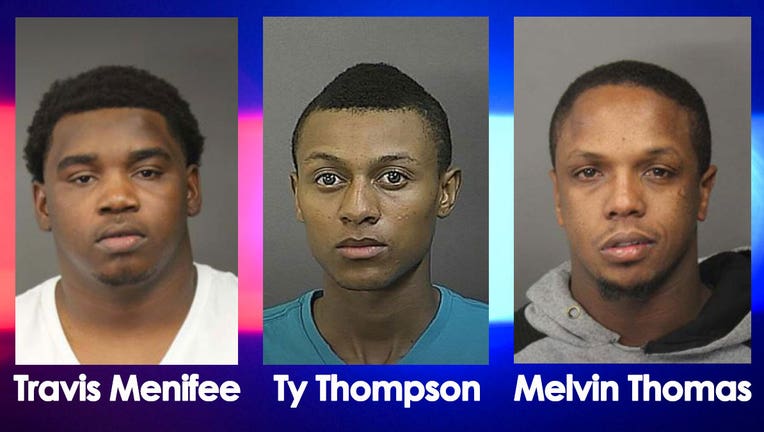 BAYTOWN, Texas - A Baytown Police Department Detective was shot at while looking for a wanted felon last week.

According to the Baytown Police Department, the detective was looking for the wanted felon in the 10000 block of Cedar Landing.

That’s when, officials said, the detective was confronted by unknown persons in an SUV that had pulled alongside his passenger door and stopped.

Fearing for his safety, officials said the detective left the area but was pursued on Highway 146 by the suspects.

While being followed and after notifying officers that he was being followed, the unknown suspects began firing at the detective.

At least one of those shots struck his vehicle as he drove southbound on Highway 146.

Officers were later able to locate the suspect vehicle at a home off of Booker Street in Baytown.

As a result of the investigation, three men, 22-year-old Travis Menifee, 30-year-old Ty Thompson, and 33-year-old Melvin Thomas, all of Baytown, were charged with aggravated assault with a deadly weapon.

"The Baytown Police Department has made a serious commitment to ensuring that our families, our visitors, and the streets in Baytown are safe for everyone," said Chief John Stringer in a statement. "We have reorganized our efforts to focus on key actors who are engaging in these criminal acts. During the course of an investigation to reduce the recent increase of violence, a Baytown Police Detective was the victim of an attempted assault. We will continue, with greater resolve, to invest our energy, technologies, personnel hours, and leverage our partnerships with the community and area law enforcement agencies to end this criminal activity. The entire Baytown Police Department is fully committed to our mission and determined to make Baytown the safest city in Harris County."