President Biden is taking immediate action to address the baby formula shortage crisis nationwide. The White House says it will invoke the Defense Production Act and launch Operation Fly Formula to expedite special flights of formula supply from other countries.

In an effort to address a nationwide shortage, the first baby formula flights will arrive in Indiana this weekend.

An additional 114 pallets of Gerber Good Start Extensive HA formula are expected to arrive over the new few days. 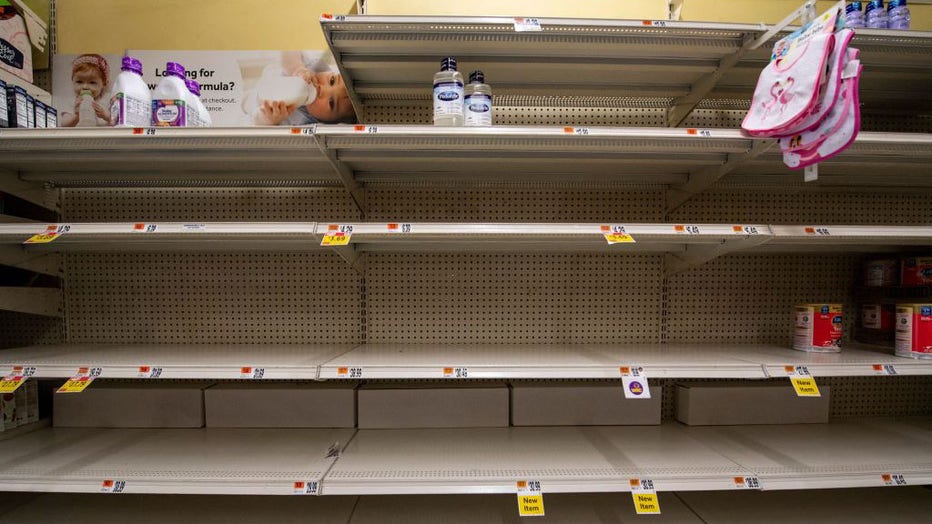 Shelves are pictured empty in Chelsea, Massachusetts on May 20, 2022. (Photo by Joseph Prezioso / AFP via Getty Images)

President Biden had initially requested that the Pentagon use commercially chartered aircraft to move the formula from Europe to America. However, the administration said no commercial flights were available this weekend.

"Operation Fly Formula" comes after Biden invoked the Defense Production Act to speed up the production of infant formula.

The order requires suppliers of formula manufacturers to fulfill orders from those companies before other customers.

The Food and Drug Administration's (FDA) head Dr. Robert Califf told lawmakers Thursday that Abbott Nutrition’s Michigan formula plant could be up and running by next week – though Abbott said it would take a couple of months before its product is available on shelves.

Califf said it will be "a few weeks" before supplies return to normal levels, especially in rural areas.

The plant has been closed since February due to contamination issues.

Abbott is only one of four companies – including Gerber, Perrigo and Reckitt – that produce an estimated 90% of U.S. formula.

This week, the FDA eased importation requirements to relieve the situation.

In addition, the Senate approved legislation Thursday aimed at addressing the issue for families participating in a government assistance program that accounts for about half of all formula purchased in the U.S.

The House passed the bill the day before, which will go to the president's desk.

Lawmakers are also considering boosting staffing at the FDA, with a $28 million emergency spending bill.