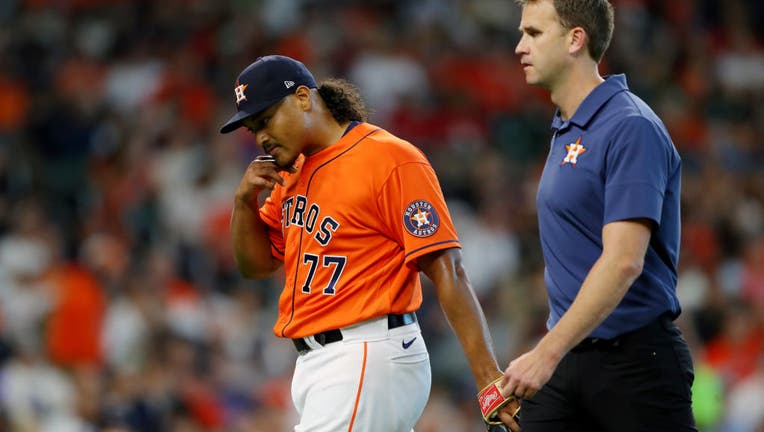 HOUSTON, TX - OCTOBER 16: Luis Garcia #77 of the Houston Astros walks back to the dugout after being taken out of the game due to an injury during Game 2 of the ALCS between the Boston Red Sox and the Houston Astros at Minute Maid Park on Saturday, O

The rookie walked Kevin Plawecki leading off the second inning and was then visited on the mound by a trainer and pitching coach Brent Strom. García walked off with a trainer after a few minutes, and Strom motioned to the bullpen for a reliever.

García was not sharp from the start, allowing a leadoff double to Kyle Schwarber and walking two batters before a grand slam by J.D. Martinez.

There was no immediate word on García’s injury. The Astros are already thin in their rotation after ace Lance McCullers Jr. was left off the roster for this series because of a strained muscle in his throwing arm.

Jake Odorizzi took over after García’s exit, pausing the game for several minutes while he warmed up on the field. Odorizzi is a starter who was left off the roster for the Division Series before getting a spot in this round because of the injury to McCullers.