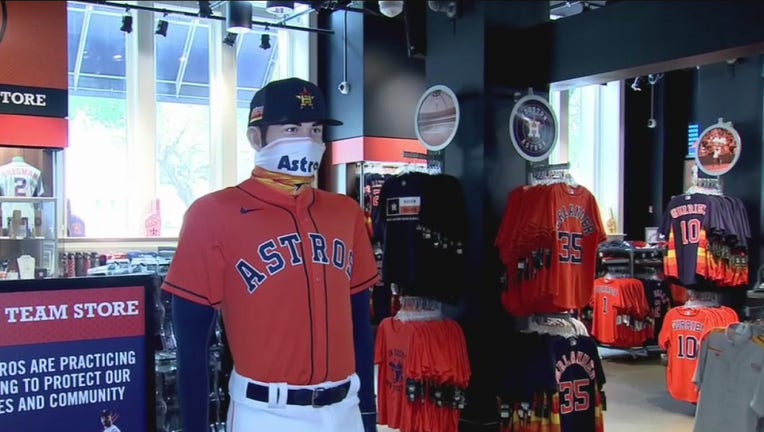 HOUSTON - It’s opening week for Major League Baseball and the countdown continues to opening day. The Houston Astros start the regular season at home Friday against the Seattle Mariners.

The Astros team store opened on Monday. Of the many new items for sale, fans can now purchase Astros COVID-19 masks.

Social distancing: What to do and what not to do to slow the spread of COVID-19

The 2020 baseball season will be unlike any other. Instead of 162 games, the regular season will be 60 games. In addition, fans will not be allowed to attend games to start the season.

“It will definitely be a little disappointing not to go to games,” said Ashton Raddansky, an Astros fan. “I normally go to 5 or 10 games at least.”

“If they’re worried about their safety and their health, this is the best way to go about it,” said Michael Brown, an Astros fan.

A spokesperson from MLB provided the written statement below.
“Fans will not be permitted to attend MLB games at the start of the season,” said a MLB spokesperson. “The decision to potentially allow fans during the season will be made based on local government approval in each market and MLB’s approval after consultation with all appropriate parties.”

“I’d like to go to a game myself,” said Mayor Turner. “In order for that to happen, we need to focus on reducing community spread today.”

While fans can’t physically attend Astros games to start the 2020 season, the team is selling cardboard cutouts. For $100, fans can have their picture attached to seats inside Minute Maid Park.
If you’re interested in having your picture at Astros games this season Click here.