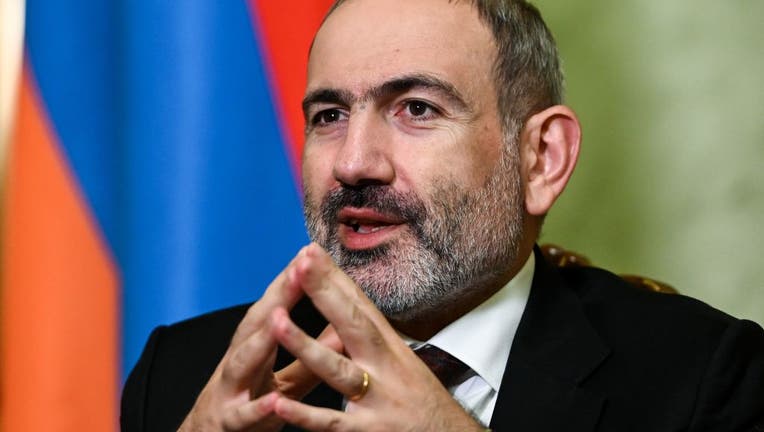 Armenian Prime Minister Nikol Pashinyan gives an interview to AFP in Yerevan on October 6, 2020. - Battles raged between Armenian and Azerbaijani forces over the disputed Nagorno-Karabakh region on October 6, with both sides vowing to pursue the conf

YEREVAN, Armenia - Officials in Armenia and Azerbaijan have announced an agreement to end fighting over the Nagorno-Karabakh region (also known as Artsakh) under a pact signed with Russia.

Armenian Prime Minister Nikol Pashinyan said on Facebook that calling an end to the fight was extremely painful for him and for the people of Armenia.

"I made that decision as a result of a deep analysis of the military situation and appreciation of the people who have the best possession of the situation. Also based on the belief that this is the best solution in the situation created," Pashinyan said.

The agreement calls for Armenian forces to turn over control of some areas it held outside the borders of Nagorno-Karabakh, including the district of Agdam.
Armenia will return the region of Kelbajar to Azerbaijan by Nov. 15 and the region of Lachin by Dec. 1.

The agreement calls for the road, the so-called Lachin Corridor, to remain open and be protected by Russian peacekeepers.

In all, 1,960 Russian peacekeepers have been deployed to the region under a five-year mandate.

The agreement also calls for transport links to be established through Armenia linking Azerbaijan and its western exclave of Nakhcivan, which is surrounded by Armenia, Iran and Turkey.

RELATED: Click here for more coverage of the war between Armenia and Azerbaijan

"It's not a victory, but there's no defeat until you know yourself. We will never know ourselves and this should be the start of our national unity, rebirth era.
We need to analyze our years of independence to plan our future and not repeat the mistakes of the past. I kneel down to all our victims. I bow down to all our soldiers, killers, generals, volunteers who protected and protected their homeland with their lives. They have saved Artsakh by their personalities," Pashinyan continued to write online.

Soon after the announcement, thousands of people took to the streets of Yerevan, Armenia’s capital, to protest the agreement, many shouting, “We won’t give up our land!” Some of them broke into the main government building, saying they were searching for Pashinyan, who apparently had already departed.

Meanwhile in Los Angeles, a protest is planned for Monday night in front of the Armenian Consulate in Glendale.

“Any agreement on the future of the Armenian nation and its territorial boundaries can only be made by the Armenian people — no politician or foreign nation will decide our destiny,” the Armenian Youth Federation wrote online.

Prime Minister Pashinyan said more details are expected to come out in the following days, citing corruption and a destroyed economy.

Fighting broke out on Sept. 27, resulting in the death of thousands of soldiers and several civilians. Much of the residents in Artsakh have been displaced as heavy shelling continues in the region.