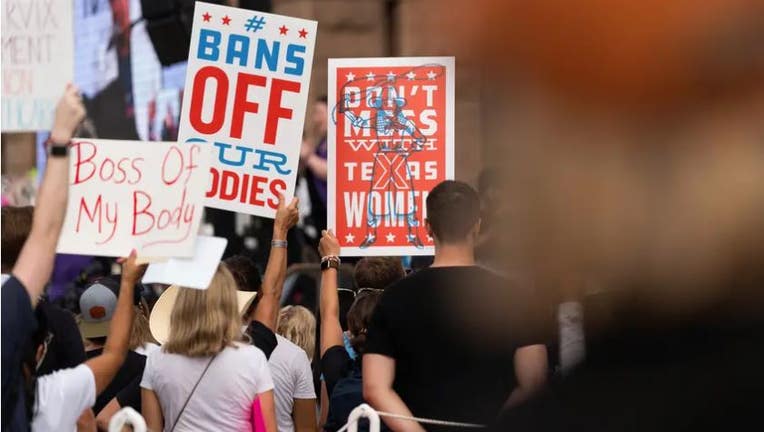 Protesters of Senate Bill 8 stood at the front steps of the Texas Capitol during a march last weekend. Credit: Michael Gonzalez/The Texas Tribune

The 5th U.S. Circuit Court of Appeals late Friday allowed Texas’ near-total abortion ban to again be enforced, after freezing a federal judge’s temporary block the law upon the state’s request, just two days after the order was issued.

The 5th Circuit restored enforcement of the law hours after the state requested the court step in. Texas attorneys argued that U.S. District Judge Robert Pitman’s order to temporarily block enforcement of the state’s abortion restrictions — the strictest in the nation — "violates the separation of powers at every turn."

Texas’ new law has mostly flouted the constitutional right to have an abortion before fetal viability established by Roe v. Wade in 1973 and subsequent rulings. That’s because it leaves enforcement of the new restrictions not to state officials but instead to private citizens filing lawsuits through the civil court system against people who perform or assist someone in getting an abortion.

Late Wednesday, Pitman — a 2014 appointee of former President Barack Obama — forbade state court judges and court clerks from accepting lawsuits that the statute allows as part of a lawsuit brought by the U.S. Department of Justice.

The new Texas law, known as Senate Bill 8, bans abortions as early as six weeks into a pregnancy, but the state doesn’t enforce it. Rather, ordinary people are empowered to file lawsuits against people or entities perceived to be helping someone get an abortion in the state in violation of the law. The law lays out a penalty of at least $10,000 for people or groups that are successfully sued.

Pitman — a 2014 Obama nominee — forbade on Wednesday state court judges and court clerks from accepting lawsuits that the law allows. He ordered the state to publish his order on all "public-facing court websites with a visible, easy-to-understand instruction to the public that SB 8 lawsuits will not be accepted by Texas courts."

In court filings Thursday and Friday, Texas sought approval for how it would alert the courts, saying it would cooperate in "good faith" with the judge’s order until and if the 5th Circuit intervenes.

Senate Bill 8 went into effect Sept. 1, forcing all major abortion clinics to stop offering abortions after an embryo’s cardiac activity is detected, which can happen before many people know they’re pregnant. Some providers stopped offering the procedure altogether out of fear of litigation.

But at least one major provider in the state — Whole Woman’s Health — quickly began performing abortions that had been outlawed, a day after Pitman’s order.

The 5th Circuit already issued an emergency stay in late August to stop district court proceedings and cancel a hearing in another lawsuit challenging Texas’ abortion law. Pitman is also overseeing that case, which was brought on by abortion providers.