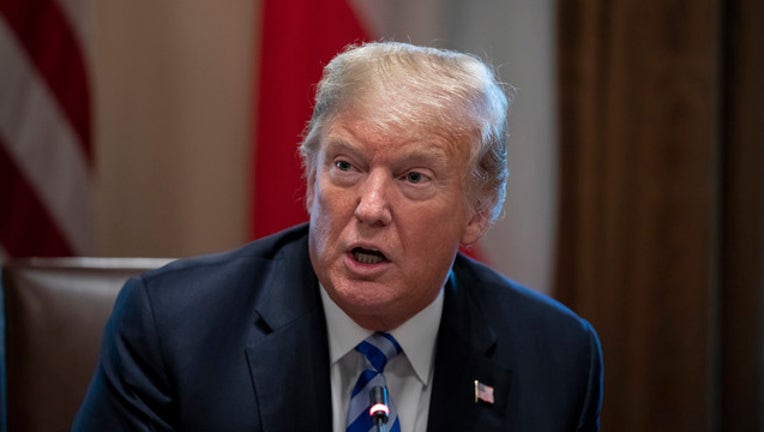 Donald Trump speaks as he meets with the Emir of Kuwait Jaber Al-Ahmad Al-Sabah during an expanded bilateral meeting in the Cabinet Room of the White House. (Photo by Alex Edelman- Pool/Getty Images)

WASHINGTON (AP) -- In a striking anonymous broadside, a senior Trump administration official wrote an opinion piece in The New York Times on Wednesday claiming to be part of a group of people "working diligently from within" to impede President Donald Trump's "worst inclinations" and ill-conceived parts of his agenda.

Trump called it a "gutless editorial" and "really a disgrace," and the press secretary called on the official to resign.

The writer, claiming to be part of the "resistance" to Trump but not from the left, says, "Many Trump appointees have vowed to do what we can to preserve our democratic institutions while thwarting Mr. Trump's more misguided impulses until he is out of office." The newspaper described the author of the column as a senior official in the Trump administration.

A defiant Trump, holding an event with sheriffs at the White House, lashed out at the Times for publishing the op-ed.

The publication of the op-ed immediately triggered a wild guessing game as to the author's identity on social media, in newsrooms and inside the West Wing, where officials were blindsided by its publication.

In a blistering statement, press secretary Sarah Huckabee Sanders accused the author of choosing to "deceive" the president by remaining in the administration.

"He is not putting country first, but putting himself and his ego ahead of the will of the American people," she said. "The coward should do the right thing and resign."

Sanders also called on the Times to "issue an apology" for publishing the piece, calling it a "pathetic, reckless, and selfish op-ed."

It was not immediately clear what, if any, steps were being taken by the White House to attempt to unmask the writer.

The column was released a day after the release of details from an explosive new book by longtime journalist Bob Woodward that raises concerns among the highest echelon of Trump aides about the president's judgment.

The writer of the Times op-ed said Trump aides are aware of the president's faults and "we are trying to do what's right even when Donald Trump won't."