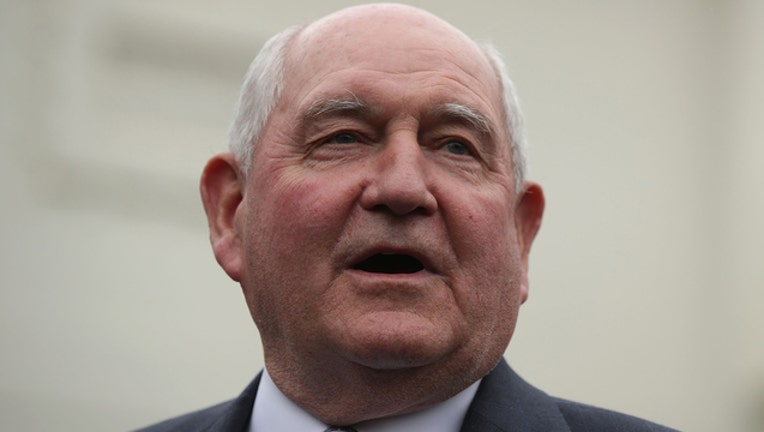 Agriculture Secretary Sonny Perdue speaks to members of the media outside the West Wing of the White House after a Roosevelt Room event April 25, 2017 in Washington, DC. (Photo by Alex Wong/Getty Images)

WASHINGTON (AP) — The Latest on President Donald Trump's State of the Union speech (all times local):

The Cold War-era ritual took on new significance after the attacks of September 11, 2001, as fears of terrorism replaced nuclear war as a top threat facing the nation.

President Donald Trump will tell the American people that it is "our new American moment" and call on Republicans and Democrats to come together in his State of the Union speech.

That's according to excerpts released Tuesday evening by the White House.

Trump will strike an optimistic and bipartisan tone, telling Americans he is "extending an open hand to work with members of both parties, Democrats and Republicans, to protect our citizens, of every background, color and creed. "

He'll also discuss the impact of the Republican tax overhaul, explain his administration's efforts to combat the Islamic State group and call on Congress to pass a major infrastructure investment plan.

A handful of immigrants who have legally lived in the U.S. since disasters struck their countries years ago will attend President Donald Trump's State of the Union address as guests of Democratic lawmakers.

The immigrants benefit from temporary protections granted to people from countries ravaged by natural disasters or war.

The Trump administration has ended the temporary protection for El Salvador, Haiti and Nicaragua and will make a decision later this year for Honduras.

Democratic lawmakers want to put a face on immigration policy.

Nery Martinez, guest of Nevada Rep. Jacky Rosen, fled civil war in El Salvador and now lives in Las Vegas. Martinez says he'll be at the address to remind the president that temporary protection recipients are "here to make this already great nation even greater."

What has President Donald Trump learned in his first year as president? That you have to lead with "heart."

That's what Trump told network news anchors during a pre-State of the Union lunch Tuesday.

Trump says, "You govern with all of the instincts of a businessperson, but you have to add much more heart and soul into your decisions than you would ever have even thought of before."

That's according to excerpts released by the White House.

Trump also says issues like immigration would be "so simple" to solve if they were pure business matters, but he says he realizes that "millions and millions of people" are affected by his actions.

He adds that "it's much different, in that way, than I thought it would be."

First lady Melania Trump is promoting the guests she'll be sitting with at her husband's first State of the Union address.

The first lady tweeted Tuesday that she'll be joined at the speech "by an honorable group of Americans," including "heroes who have served our nation in times of need, families who have suffered at the hands of evil, and citizens who have embraced the American dream."

Mrs. Trump has been keeping a low profile following a report that adult film star Stormy Daniels had an affair with Donald Trump in 2006, shortly after he and the first lady wed.

The Wall Street Journal has reported that Trump's personal lawyer brokered a $130,000 payment to Daniels to prohibit her from publicly discussing the alleged affair before the presidential election.

Many congressional Democrats are giving their guest passes for President Donald Trump's first State of the Union address to young immigrants known as "Dreamers," who were brought to the U.S. illegally as children.

More than 20 Dreamers are expected in the House gallery Tuesday night to put a face on the toll of the congressional stalemate on immigration policy.

Trump ended Obama-era protections for such immigrants. He now says he wants to grant them a path to citizenship, but Congress has been unable to come up with a legislative solution for an issue at the center of the recent government shutdown.

President Donald Trump has told news anchors from all the major TV networks at a White House lunch that he is striving to bring the country together.

Journalists from outlets including PBS, CNN and Fox News say Trump told the group Tuesday that there is "tremendous divisiveness" in the country that has existed for years.

He says if he could unite the country, he would consider it a great achievement.

The lunch is an annual White House tradition ahead of the president's State of the Union address.

Fox News host Bret Baier said on the "The Daily Briefing with Dana Perino" that the lunch menu featured smoked tomato soup, thyme roasted chicken and orange merengue pudding. Baier says the rest of the lunch was off the record.

Four of the Supreme Court's nine justices are expected to attend the State of the Union address.

Chief Justice John Roberts and Justices Stephen Breyer, Elena Kagan and Neil Gorsuch are expected at the speech. Roberts, Breyer and Kagan regularly attend, as do justices appointed by the president who is speaking. Trump nominated Gorsuch a year ago.

Among the justices who will not be in the audience, Clarence Thomas and Samuel Alito haven't attended a State of the Union speech in years. Alito last went in 2010, when he was captured on camera mouthing the words "not true" in response to President Barack Obama's criticism of the court's then new ruling in the Citizens United campaign finance case.

Justice Anthony Kennedy's long-standing travel plans have him in California. Justice Ruth Bader Ginsburg is in Rhode Island and Justice Sonia Sotomayor is in Panama.

The official stressed that the speech is the president's and that Trump has spent months giving his aides "tidbits" on lines he wants to use.

The White House has said Trump will use the speech to discuss economy and national security, as well as trade, immigration and infrastructure.

The official was not authorized to discuss internal White House deliberations by name and spoke on condition of anonymity.

President Donald Trump will herald a robust economy and push for bipartisan congressional action on immigration in Tuesday's State of the Union address.

The speech marks the ceremonial kickoff of Trump's second year in office and is traditionally a president's biggest platform to speak to the nation. However, Trump has redefined presidential communications with his high-octane, filter-free Twitter account and there's no guarantee that the carefully crafted speech will resonate beyond his next tweet.

Still, White House officials are hopeful the president can use the prime-time address to Congress and millions of Americans watching at home to take credit for a soaring economy. Trump argues that the tax overhaul he signed into law late last year has boosted business confidence and will lead companies to reinvest in the United States.