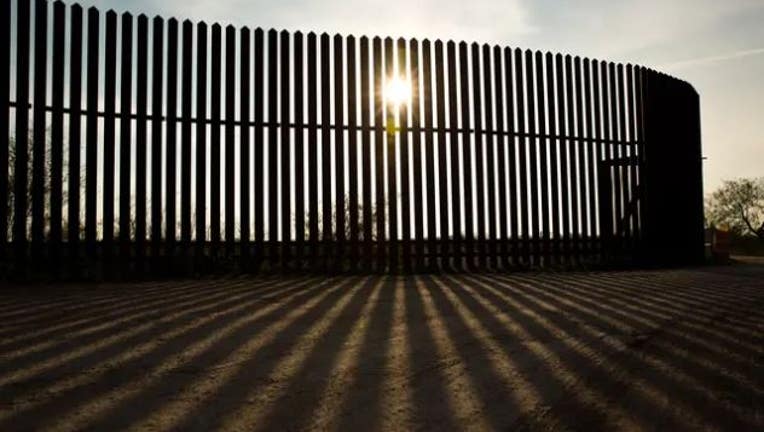 An incomplete border wall along the Rio Grande River in South Texas, ordered under the George W. Bush administration, has had environmental and cultural impacts. Credit: Callie Richmond for The Texas Tribune

**EDITOR'S NOTE** The original headline to this story was shortened for length.

Stephen F. Austin, Donnie Darko and a person who calls himself the King of the Wild Frontier were among the first people to give money to support Gov. Greg Abbott’s border wall effort after he announced he would be seeking private donations to help fund it.

But there’s no way to verify if Austin, who donated $10, is of any relation to the man known as the "Father of Texas," or if Darko, who gave $25, bears resemblance to the titular character in the cult film about a teenage boy who meets a man in a bunny suit who tells him the world will end in 28 days. The King of the Wild Frontier donated $50, but public records don’t state where he lives.

Despite promises from Abbott that transparency in the crowdfunding process for the border wall would be paramount, donor information released to The Texas Tribune for the first week of collections was bereft of any way to verify the identities of the majority of the donors. Abbott’s office is not disclosing the locations of donors, nor is it requiring that they identify themselves with their real names.

"We expect full transparency and accountability," Abbott said in June when announcing the crowdfunding effort. "So the public will know all the money coming in and how that money is being used."

The shortcomings in the donation disclosures have raised ethical concerns about the private fundraising effort for the governor’s major state initiative. Experts have warned that without clear disclosure rules and enforcement, the public may never truly know who is funding the state’s border wall. Worse, they warned, it could invite the perception of a "pay to play" system in which donors, who are anonymous to the public, benefit from their donations to one of Abbott’s priority projects.

"You don’t want to have this big slush fund of money that is going to this pet project of the state executive that has zero accountability to anybody, with money coming in from who knows what and God knows who," said Beth Rotman, national director of money in politics and ethics at Common Cause, the government watchdog group.

The Tribune reviewed donations to Abbott’s border wall efforts that covered the first eight days of its existence, from June 10-17. During that time, the state received more than 3,300 individual donations. The highest was $5,000.

As of Thursday, the total donations for the wall exceeded more than $873,000, but the list of individual donor names beyond the first eight days was not immediately available.

In addition to potentially fake names, the list also includes dozens of incomplete names. Donors are identified as "R T," "S P," "Red A" and "A Rim."

Abbott’s office did release the city and state information for just 25 donors who had sent money in the mail prior to the establishment of its online fundraising portal on June 16. All except two of those donations came from outside of Texas. One $10 donation received by mail was from "American Citizen/Veteran" and was listed as anonymous.

After being presented with the Tribune’s findings, Abbott spokesperson Renae Eze repeated the governor’s commitment to "ensuring full transparency and accountability to our fellow Texans," saying Abbott had followed a "process that has been around for decades to oversee gifts, grants, and donations," to establish the border wall’s funding mechanism.

Eze added that the donations were subject to the state’s public information laws and that Abbott’s office was releasing the information in accordance with those laws.

"Due to the sensitive nature of the personal information for the credit card transactions, and the very real fear of retaliation for donating to the border security mission, billing information is only being kept by the state agency responsible for processing the credit card financial transactions," Eze said in a statement. "Until the Biden Administration starts doing their job, Texas is stepping up to secure our southern border and protect Texans and Americans alike."

The Tribune has not sought the disclosure of the donors’ credit card numbers, but it has asked for donor names, cities and states to aid in the verification of identities.

In a similar instance, when Arizona tried to crowdfund the legal defense of a controversial immigration law that allowed police to ask citizens for their citizenship status, the state released the names of donors and the states where they lived.

Not everyone who donated to Texas’ wall hid their identity.

Political consultants like Sherry Sylvester, a top aide to Lt. Gov. Dan Patrick, gave at least $50, and Allen Blakemore, who advises some of the state’s top GOP politicians, including Patrick, donated $25.

"Most people don’t have a problem with it," said Robin Kolodny, chair of the political science department at Temple University. "Look at the Koch brothers, [Sheldon] Adelson, Michael Bloomberg. They hide nothing. I’m not saying there aren’t people trying to hide. But there’s a lot of people who don’t have a problem."

Kolodny, who has studied public disclosures in campaign financing, said people who donate to efforts like Abbott’s border wall do so because they believe in the cause.

Experts likened the fundraising effort for the wall to political contributions for campaigns and said that Abbott’s office should put in place tools to reassure the public of the project’s transparency.

"You don’t want to have anonymity because it raises the danger that somebody will be steering public policy," said Richard Briffault, a law professor at Columbia University.

Under Texas political reporting laws, campaigns are required to ask donors for their name, address and business occupation when asking for donations to verify their identity. But Abbott’s border wall fundraising is not governed by those laws and does not have those requirements.

"It makes sense, certainly, that you have an executive saying that we are going to disclose where the funds are coming from," Rotman said. "But if that’s not meaningful disclosure ... when it’s just a pledge, then it’s not really worth the paper that it’s written on."

Rotman said Abbott could start by adding language to the website asking donors to certify that they use their legal name. His office could also list donor names on the website contemporaneously for the public — as opposed to only providing them in response to open records requests — and add software that would prevent donors from listing incomplete names.

Beyond getting rid of the cloud of anonymity, experts also said more disclosure could help remove the perception of "pay to play," in which influential donors could give money to Abbott’s border wall project in the hopes of political favors or government contracts in the future.

"If you’re looking at lobbyists or political advisers who want him to hire them because he wants to run for president, maybe they’re all staking their claims," Kolodny said.

Abbott’s office did not respond to questions about those concerns.

On the flip side, a requirement for addresses and occupations could help avoid confusion. One name among the list of early donors is Mike Toomey, who donated $100. That is the name of one of the state’s top lobbyists, whom Abbott tapped last year to head a strike force to reopen Texas during the coronavirus pandemic.

But Toomey, the lobbyist, said he had not donated to the border wall.

The system has also opened the door for creative donors to send political messages to state officials.

On June 17, one donor gave $1, the minimum amount required to donate to the campaign. Under the field for name, the donor listed "StopWasting TaxpayerMoney."