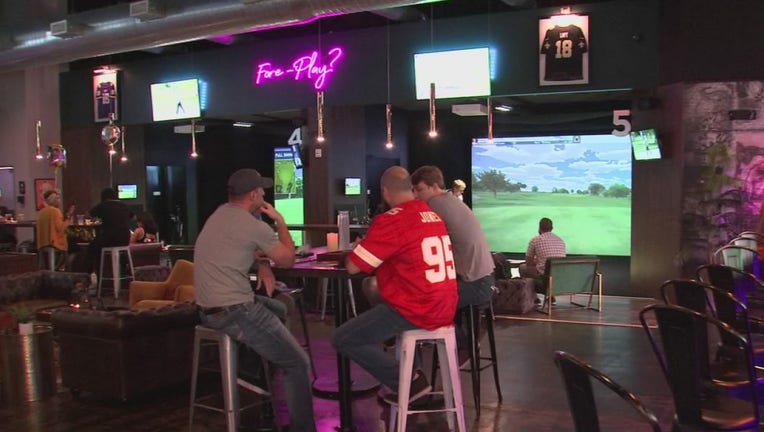 HOUSTON - The 2020 Vivint Houston Open wrapped up a successful debut at a newly renovated Memorial Park Golf Course Sunday evening. Although attendance was limited this year due to Covid-19 restrictions, officials estimated the Houston Open still brought in millions of dollars to the local economy.

Up to 2,500 fans were allowed to attend the Houston Open each day.

As the first PGA tour event in the U.S. to allow fans since the pandemic began, tickets sold out quickly, so golf fans trickled into nearby businesses.

Loft 18, an interactive sports bar in Sawyer Heights, was one of two official Houston Open watch parties that loved having that extra boost.

Migliore says Loft 18 opened last October, but in March, had to shut down temporarily because of Covid-19 restrictions.

"We probably took nearly a 30-40% hit. At one point, we had a 100% hit and we had no business for a couple of months at least; then we opened back up and it was very slow when it started," Migliore said.

According to the Houston Business Journal, the Astros Golf Foundation estimates the Houston Open could bring in $90 million a year to the city.

No official revenue numbers have been released yet for this year, but Richard Tapia, a Senior Marketing Manager with the Houston Astros believes the economic impact remains in the millions.

"You're talking hotels, you're talking restaurants, even these watch parties that we’re having here, it’s having a bigger impact beyond just what you’re seeing at the park. It's several million dollars and it has an impact even in a limited year like this year. In future years, we anticipate that impact to hopefully be in the tens of millions of dollars each year that we can do. Not just the surrounding areas of Memorial Park, but the greater impact of what we can do as far as giving back to the charities," Tapia said.

The Houston Open has not been held at Memorial Park in 57 years.

A spokesperson from Houston First said the event was a huge success for the city's hospitality industry, especially being so close to downtown this year.

Late Sunday night, Steven Chou, General Manager of The Post Oak Hotel, said, "Hosting the Houston Open in the heart of Uptown was impactful and uplifting for so many businesses. The tournament offered excellent synergy for The Post Oak Hotel throughout the entire weekend. With our close proximity to Memorial Park and our expansive amenity offerings, we saw a significant boost in room and restaurant reservations from golfers and golf enthusiasts alike. We are proud to provide the ideal location and look forward to our continued partnership with the Houston Open in it’s full capacity next year.”