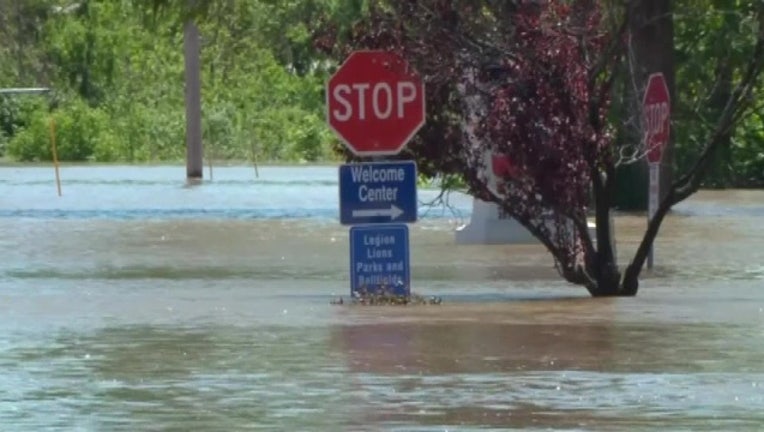 ST. LOUIS (AP) - Two more people were confirmed dead Tuesday after their vehicles were swept away by floodwaters in Missouri, bringing the death toll from sudden spring flooding in the state to at least five.

The latest deaths occurred in an area of southeast Missouri where heavy rains pushed rivers to record levels. The flood fight also continued near St. Louis, where sunny skies belied an ominous forecast: More rain that could send the bulging Meramec River to record heights and potentially into hundreds of homes.

The Missouri State Highway Patrol reports a 60-year-old man was found dead late Monday inside a pickup in a ditch along Highway 53, where authorities believe water from the flooded Black River swept the truck off the road. A 69-year-old woman from Harviell was found dead Tuesday on Butler County Road 153, still inside her vehicle that was apparently swept away by water from a flooding creek.

Highway Patrol Sgt. Clark Parrott said motorists sometimes don't realize how dangerous even a small amount of water on the road can be.

"It seems like we go through this every year, and it's just heartbreaking," he said.

The Meramec River already is nearing all-time highs in towns such as Pacific, Eureka and Valley Park, potentially threatening 1,700 homes. As much as 2 inches of rain is forecast Wednesday through Thursday. The National Weather Service predicted that the crest at Eureka will top the record set in December 2015, and Valley Park will tie the mark set that same year.

Much of Missouri was inundated with up to 12 inches of rain over the weekend. More than 270 roads remain closed, including a 57-mile stretch of Interstate 44 from central to southern Missouri, and a 23-mile stretch in suburban St. Louis. The Missouri Department of Transportation said a portion of Interstate 55 in St. Louis County will close before daybreak Wednesday, due to flooding on the Meramec.

About 200 homes have already been damaged by Meramec River floodwater, and another 1,500 are threatened, said St. Louis County emergency management director Mark Diedrich.

St. Louis County Police Chief Jon Belmar urged residents behind Meramec River levees to get out if they haven't already. Even if the levees hold, he said, there are dangers.

"The water is filthy," Belmar said at a news conference. "There are all sorts of health issues down there. We strongly urge them to evacuate until we can get this under control."

The Mississippi is a few feet above flood stage north of St. Louis, but major flooding is forecast by the end of the week in towns below where the Meramec spills into the Mississippi, including Ste. Genevieve, Cape Girardeau and Scott City.

Major flooding is now predicted on parts of the Missouri River in eastern Missouri, but because of buyouts in recent years, damage is expected to be minimal.

Amtrak also suspended rail service across Missouri because of flooding. A spokeswoman said the tracks could reopen Saturday.