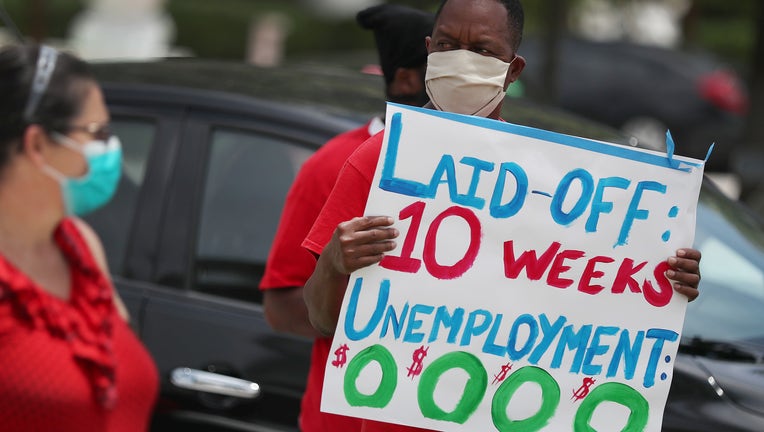 A man joins in a protests against the unemployment system on May 22, 2020 in Miami Beach, Florida. (Photo by Joe Raedle/Getty Images)

OAKLAND, Calif. - People have already lost their jobs. And their health insurance. Fears about how Americans will pay the rent and buy food have been growing since the spring. And now, there's another looming crisis: 12 million Americans will also be cut off from unemployment benefits the day after Christmas. And this crisis, not surprisingly, will affect people of color the most.

When the $600-a-week federal unemployment stimulus ended in July, many Americans could no longer make ends meet without the additional aid from the CARES Act. That money expires Dec. 26 and has not been renewed.

Californians got an extra $300 for three weeks in September, but that payment left out the lowest-paid workers, and has not been replaced either.

How Americans will get by is the big question.

“There's been a ton of stuff in this recession that, we don't know exactly how it's gonna play out,” Heidi Shierholz, a senior economist and director of policy at the Economic Policy Institute, said. “And this—we know exactly how it's gonna play out. Millions of people will lose their benefits on the day after Christmas, and there won't be jobs for them. So they will just go to no income.”

In California, the majority of unemployed workers are a bit luckier than in other states—it's one of 18 with an extended benefits program that will continue at the end of December.

But certain workers — estimated to number 1.6 million — aren't eligible for any type of benefit extension at all. The workers who will lose benefits in California are those on the Pandemic Unemployment Assistance program—a CARES Act provision that provides benefits for workers not normally eligible for unemployment—which includes gig workers, self-employed people and those with a limited work history. Normally, to collect unemployment, an applicant must submit W-2 forms from previous jobs to prove employment and get a wage assessment, which is about 60% of wages, up to $450 a week.

That's the "hard cutoff,” said Andrew Stettner, a senior fellow at the Century Foundation who recently authored a paper about the jobless benefits cliff. “So even if you thought that you were going to have 15 more weeks of benefits on your claim, you won't get it.”

Stettner said that when the bill was originally passed, he believes that lawmakers thought things would be “a lot better” by the end of December. A total of 88,000 people were hospitalized with COVID-19 Tuesday, reaching a new all-time high for the 15th consecutive day.

Whether workers will see another round of stimulus is up in the air, but people shouldn’t count on it, according to Stettner and Shierholz.

“In the previous four recessions, extended benefits were available to workers until at least three years after the start of the recession, recognizing the length of time needed to create jobs for all of those who had lost work during the downturn,” wrote Stettner and Elizabeth Pancotti a paper about the ending benefits.

Why the scant support for people now? Stettner said that he thinks there is “political football” in the government.

“Also, I just think people just haven't been thinking about it, it's not in the news,” he said.

Shierholz said that she could foresee another round of stimulus if there is Democratic control in Congress.

“If the Dems win in Georgia, and there will be Democratic control of Congress, then I think they'll be through reconciliation,” Shierholz said. “There'll be a substantial stimulus package. And it would include an extension of unemployment insurance benefits from the CARES Act.”

As cases rise throughout the country, including in California, and curfews and restrictions remain and are increased, this costs people jobs, and makes it more difficult to find jobs, Stettner said. There are far more people without jobs than there are existing job openings.

Shierholz and Stettner both said that the recession has, and will continue to, hit Black workers the hardest because the virus has disproportionately impacted this community.

Withholding a stimulus will exacerbate racial inequality and force everyone to make impossible decisions about paying for food, medicine and housing, Shierholz said.

“We know that because of things like long-lasting things like occupational segregation, and other labor market disparities, that are rooted in structural racism," Shierholz said, "Black and brown workers have lost way more jobs in this recession, disproportionately more jobs, and then also have less wealth to fall back on."

Caroline Hart is a writer and producer at KTVU. She covers unemployment, inequality, food issues, breaking news, and much more. She can be reached at caroline.hart@foxtv.com.