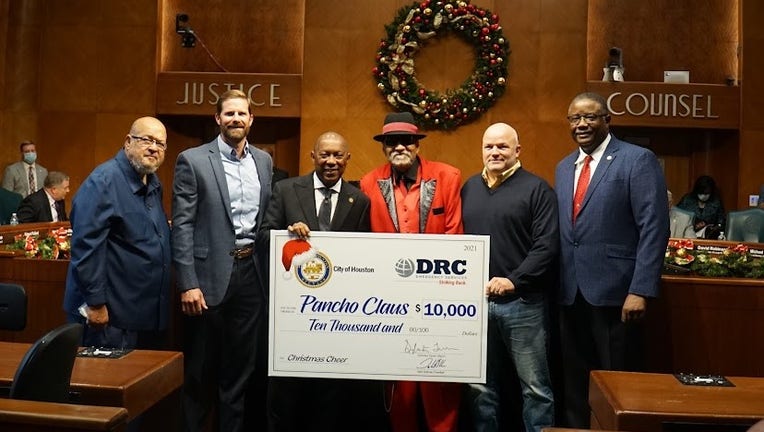 HOUSTON - Houston Mayor Sylvester Turner joined with community partners to show appreciation and deliver some holiday cheer to a well-known figure in the Houston area.

For more than 40 years, Richard Reyes has dressed up in a zoot suit and used a low rider sleigh in his role as Pancho Claus to deliver gifts and put smiles on children’s faces each Christmas.

However, due to the pandemic and a decline in donations, that put a damper on his ability to reach children.

As his non-profit turns 40 this year, Richard Reyes, better known as ‘Pancho Claus,’ is in need of donations to buy gifts for the less-fortunate.

After hearing the news, Turner reached out to community partners to raise funds and make a donation to keep the holidays merry and bright throughout the community.

"We've seen him on television, in parades, but most importantly – in our neighborhoods. For four decades, he has worked tirelessly to ensure that kids in under-resourced and underserved neighborhoods have something special under the tree come Christmas morning," said Mayor Turner in a release. "So much of his work relies on the gifts that come from other Houstonians. Without the generosity of the people of this wonderful city, Pancho Claus' efforts would not be nearly as effective."

"I thank all the people who made the donation possible. Pancho Claus is a spirit," said Reyes. "It is a movement of a lot of people in our community. And this check is going to enable us to keep going this year and reach out to communities that have the highest poverty rate in Texas, if not the nation."

"DRC has been grateful to be a partner with the city over several years responding to natural disasters. We could think of no better way to give back to the community than by supporting someone like Pancho Claus. We appreciate this opportunity and thank you for what you are doing," said DRC Vice President Joe Newman.

"I encourage everyone who can to please support Pancho Claus or any other charity of their choosing," said Mayor Turner. "Let's keep the holiday spirit going as we make this and every year special for children and families in need."