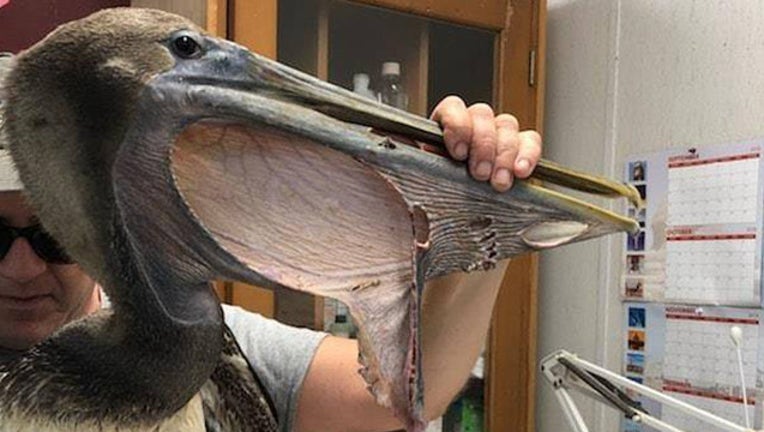 Florida Fish and Wildlife Conservation Commission shared images of a juvenile brown pelican with a torn pouch. The tear occurred after it consumed fish carcasses, according to the Key West Wildlife Center, a non-profit wildlife rescue and rehabilitation center.

“It is common to see birds at fish-cleaning stations, watching for an easy meal,” FWC wrote in its Facebook post. “Feeding wildlife is never a good idea.”

The particular brown pelican in the photo was located at Historic Charter Boat Row marina on December 22, 2018. It was taken to the Key West Wildlife Center. Its pouch wounds were still fresh enough to sew up, and experts used surgical staples. However, its trachea was exposed from the tear, and the pelican contracted pneumonia. It died on January 20, 2019.

Brown pelicans are seasonal in Key West, and the southernmost key sees a lot of first-year juveniles that migrate from the Carolinas, explained Thomas Sweets, the general manager for the wildlife center. The pelicans typically eat unprocessed small bait fish.

Sweets said by law, pelicans should not be fed by humans. Those who do can be arrested.

“It will make them become beggars,” he explained to FOX 13. “When people feed them, they’ll stop hunting all together. It just changes their wild behavior. They’ll stop hunting and hang out at marinas. Those exposed bone fish carcasses are of no nutritional value.”

The carcasses can not only pierce the pelican’s pouch, but also their internal organs. This year, FWC wants to step up the awareness and educate people to avoid feeding pelicans. After fileting a fish, the carcasses can be discarded in a lidded trash can or at home – instead of in the water, officials said.

- Please don’t feed pelicans and other seabirds. Feeding seabirds causes them to congregate in areas where they are more likely to get hooked or tangled in fishing line. Feeding pelicans is prohibited by law (F.A.C. 68A-4.001).
- Discard fish carcasses in marked repositories or lidded trash cans.
- Birds will feed on carcasses tossed in the water, which can lead to injury or death.  Fish carcasses often are larger than the bait fish that birds normally feed upon, and the larger bones and spines can puncture the bird’s throat or digestive tract.
- Birds attracted by fish carcasses may congregate in areas where they are more likely to become entangled in fishing line.
- Cast away from birds and shoreline vegetation.
- Collect and store loose monofilament line until it can be discarded properly.
- Keep bait buckets covered.
- Take unused bait home.
- Let other anglers know how to prevent bird entanglement.