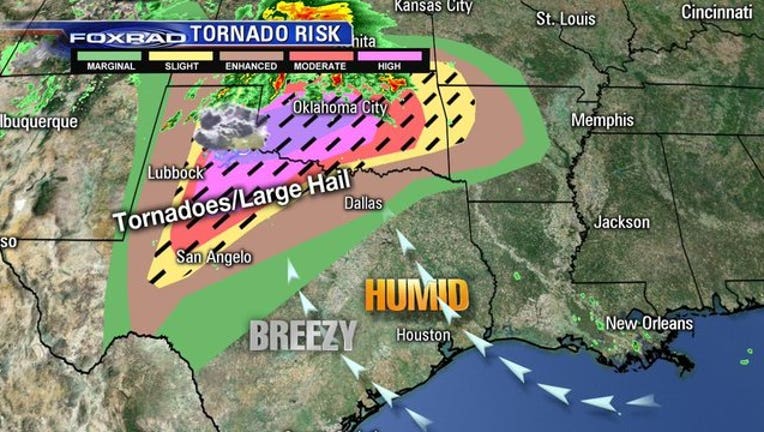 (FOX 26) - A dangerous, severe weather outbreak is forecast for parts of Texas and Oklahoma on Monday.

Some areas have been designated as "high risk" zones for severe weather. The National Weather Service Storm Prediction Center hasn't used that designation in two years.

These strong storms are bringing heavy rain, hail, and wind gusts of up to 80 mph.

The latest forecast from the Storm Prediction Center has increased the tornado probabilities from 30% to 45% from northwest Texas into central Oklahoma.

The last time a 45% tornado outlook was issued was during the Tornado Outbreak in Oklahoma and Kansas in April of 2012.

This comes after a weekend where parts of West Texas were hit with four tornadoes. Two in San Angelo, one in Ballinger and a fourth in Abilene.

School districts in Oklahoma City, nearby Norman and elsewhere have canceled classes. Tinker Air Force Base has been evacuated. The City of Moore is closing the city's buildings and ceasing operations by 1 p.m. due to the severe weather.  A flood watch is in effect for the greater Oklahoma City region.

Strong winds and hail also are forecast for the West Texas.

The National Weather Service says the storm system will move later Monday into western Arkansas. The threat of severe weather will continue into Tuesday.

It's the latest round of severe weather to strike the region after a spate of tornadoes raked the Southern Plains on Friday and Saturday, leaving widespread damage and some people injured.