Hurricane Nana hit the coast of Belize during the early hours of September 3, with predictions of “life-threatening flash floods and mudslides” from the National Hurricane Center. (Credit: COPECO via Storyful)

PUNTA GORDA, Belize (AP) - Hurricane Nana made landfall in Belize, pelting a relatively sparsely populated stretch of the country's coast with heavy rain and wind, before weakening to a tropical storm while pushing across Guatemala on Thursday.

The U.S. National Hurricane Center reported that Nana hit land between the coastal towns of Dangriga and Placencia shortly after midnight at an area around 50 miles (80 kilometers) south of Belize City with maximum sustained winds of 75 mph (120 kph), making it barely a hurricane. The storm was moving westward at 15 mph (24 kph).

Later in the morning, Nana weakened to a tropical storm with maximum sustained winds near 45 mph (75 kph). It was centered about 125 miles (200 kilometers) north of Guatemala City and neared the border with Mexico. 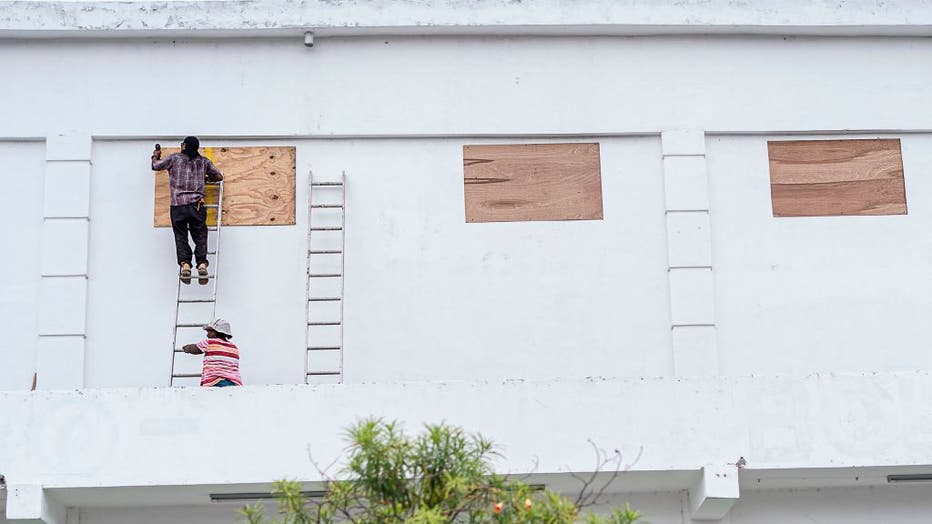 Workers board up the windows of a store in preparation for hurricane Nana -expected as a Category 1 hurricane with winds up to 74 to 95mph (119 to 152kph)- in Belize City, Belize, on September 02, 2020. (Photo by JOSE A. SANCHEZ/AFP via Getty Images)

Forecasters said it was expected to weaken to a depression and was unlikely to restrengthen after emerging over the Pacific.

Belize authorities did not immediately report injuries when Nana when landfall shortly after midnight Thursday. More than 4,000 people, primarily in the south of the country moved to government shelters.

“People were in full preparedness mode for this storm and activated their emergency plans so since it was not a big storm and the damage is contained and minimal in most areas it can be considered a good simulation,” she said.

Thousands of people stocked up on food, water and construction materials Wednesday ahead of the landfall. Long lines stretched through supermarkets and hardware store shelves were nearly bare as residents of Belize bought materials to board up windows and doors.

Heavy rains were expected in Belize, as well as in northern Honduras.