A powerful nor'easter will develop into a "bomb cyclone" off the East Coast this weekend, placing areas from New England to North Carolina at risk of heavy snow, high winds and coastal flooding beginning Friday evening.

The first weather alerts associated with the storm were issued by the National Weather Service on Wednesday. Winter Storm Watches are in effect along the coast from North Carolina to Maine, including the cities of Boston; Providence, Rhode Island; New York; Philadelphia and Richmond and Norfolk in Virginia.

A watch does not mean significant snowfall is guaranteed at that location. Rather, watches are meant to highlight areas that have the potential to see moderate to heavy snow. 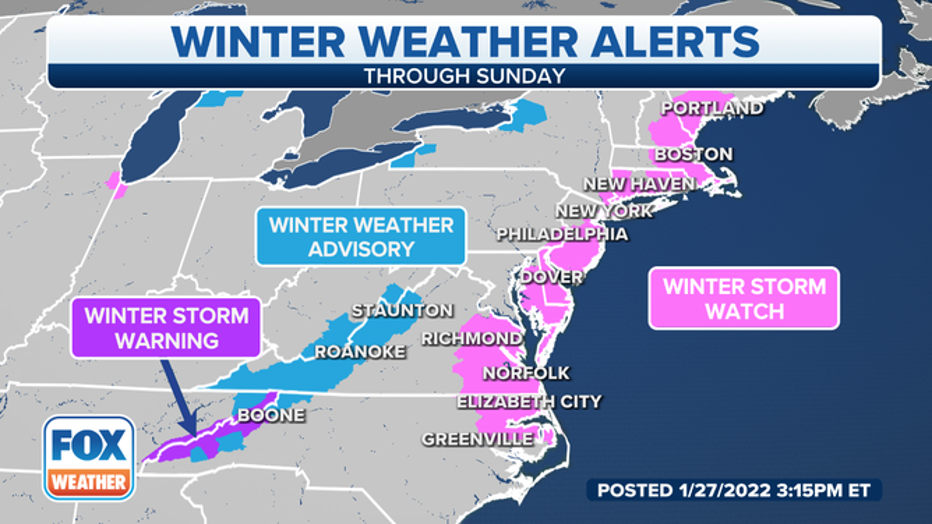 Virginia Gov. Glenn Youngkin declared a state of emergency ahead of the winter storm and warned Virginians to stay off the roads if possible.

Heavy snow with high winds could down trees and cause widespread power outages.

"We are very concerned with the forecasted impacts to our Eastern Shore region and have started pre-positioning resources to ensure a timely response to that area," Youngkin said in a statement. "The most important thing everyone can do to minimize the risks is to prepare yourself and your family."

WHAT MAKES A STORM A NOR'EASTER?

Before the storm's arrival, another blast of arctic air will surge into the Northeast on Friday in the wake of a cold front. An intensifying low-pressure system will then track near or off the East Coast late Friday through Saturday in response to an upper-level jet stream disturbance punching out of Canada and into the eastern half of the U.S.

The cold air will team up with that strengthening area of low pressure to fuel a potentially high-impact winter storm for parts of New England and the coastal mid-Atlantic.

This nor'easter is expected to intensify into a bomb cyclone, a term used to describe a low-pressure system that undergoes "bombogenesis" – defined as a rapid pressure drop of at least 24 millibars in 24 hours or less – indicative of a very intense storm.

REMEMBER ALL THAT SNOW? HERE ARE 7 MEMORABLE NOR'EASTERS OVER THE YEARS 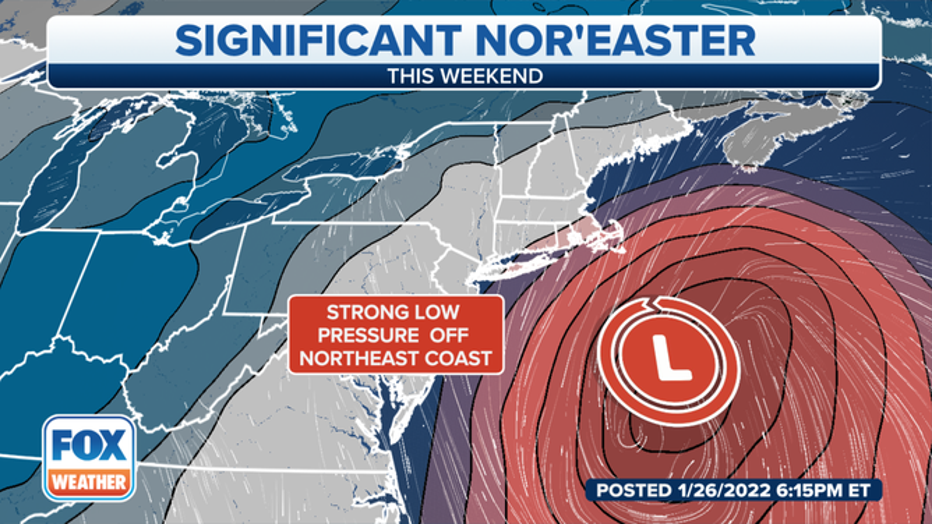 Even though we're only about one day away from this storm's development, the uncertainty in the exact track of low pressure remains unusually high, and that will be key in determining which locations will see the heaviest snow, the strongest winds and the worst coastal flooding.

It remains likely that eastern and southern New England will take the brunt of the storm. However, areas farther south from New York City and Philadelphia to the coastal mid-Atlantic, where Winter Storm Watches are in effect, might still see significant impacts from snow and wind, but the forecast confidence in those areas is lower.

Here is our current day-by-day outlook, but keep in mind that forecast changes – possibly significant ones – can be expected in the days ahead.

7 THINGS YOU CAN DO TO PREPARE, RESPOND TO THIS WEEKEND'S NOR'EASTER

Snow showers associated with the cold front will begin to spread into portions of the Appalachians, mid-Atlantic and Northeast as early as Friday morning.

Daytime snow amounts should remain light, but road surfaces are very cold, so salt and brine solutions might not be as effective as usual. That means roads could become slippery, so use caution when driving.

Farther south, rain showers will develop along the Southeast coast as the low-pressure system begins to organize offshore. 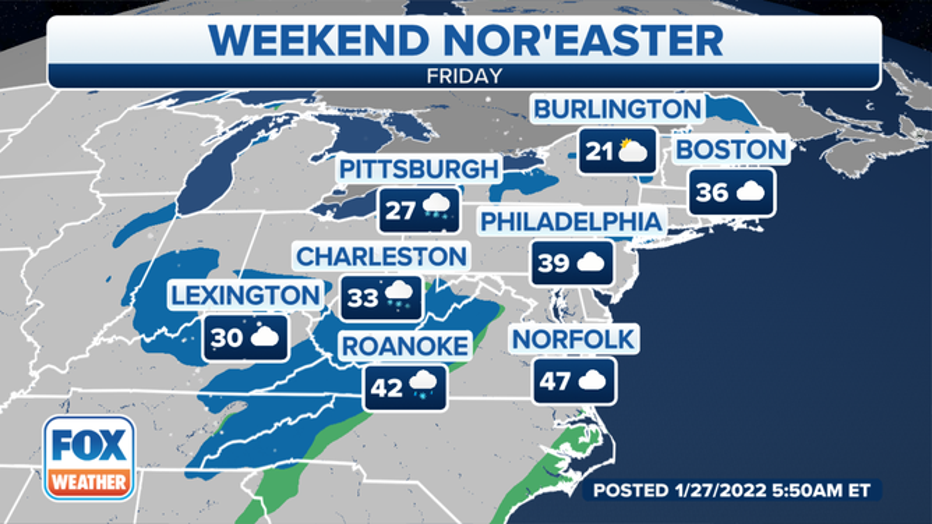 The nor'easter will start intensifying Friday night as it moves northward off the Southeast and mid-Atlantic coasts.

As it does so, snow will develop from south to north along the mid-Atlantic coast, eventually reaching southern New England later Friday night.

Winds will begin to pick up along the Eastern Seaboard, causing high surf to build as well.

In the Southeast, a period of rain changing to snow is possible as far south as the Carolinas, where snow and ice snarled travel last weekend. 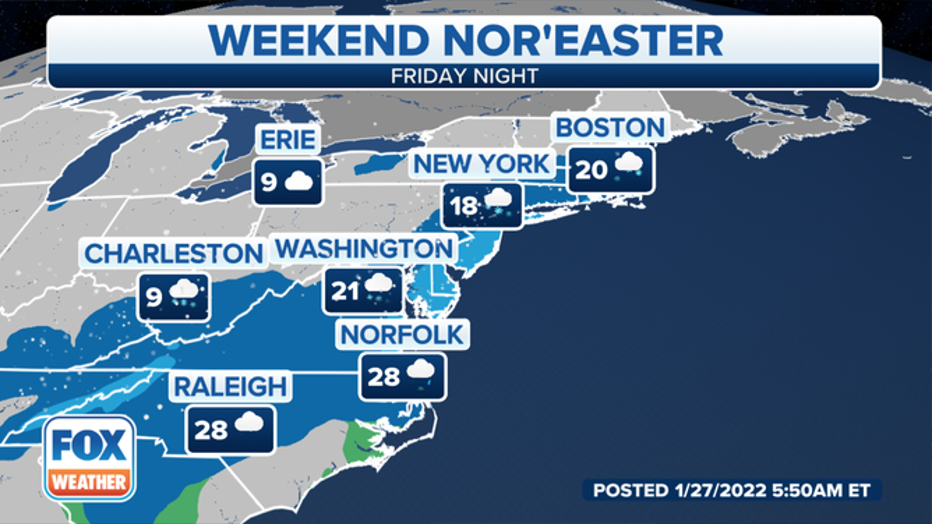 The worst of the storm will occur Saturday as the bomb cyclone reaches its peak intensity near or off the New England coast.

Heavy snow, high winds and coastal flooding are expected from New England to portions of the coastal mid-Atlantic. You're advised to avoid all unnecessary travel across this region.

WINTER STORMS AREN'T NAMED, BUT THEY ARE RATED ON A 1-TO-5 SCALE

The exact track of the low-pressure system in relation to the coastline will determine how far south and west this storm's impacts will reach.

An eastern track would focus the heaviest snow and strongest winds over New England. A more western track would bring heavy snow and high winds to not only New England, but also farther south from New York City and Philadelphia to the coastal mid-Atlantic, possibly as far south as eastern portions of Virginia and North Carolina. 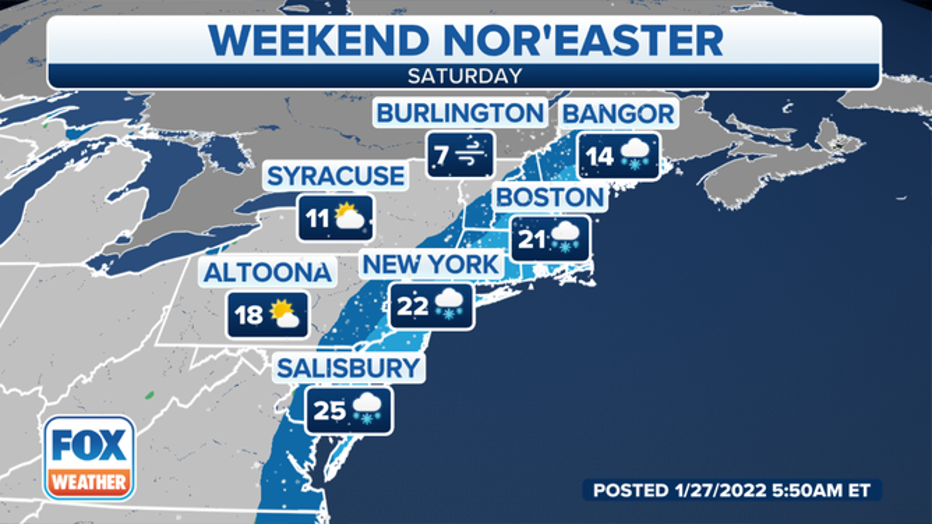 Regardless of the eastern or western track, a large portion of the Northeast coast could face a significant threat of coastal flooding, high surf and beach erosion. Astronomical tides will already be running high this weekend as we approach a new moon, which will only make these threats worse.

The Saturday morning high tide poses the greatest concern from New Jersey to Rhode Island, then the Saturday evening high tide from Massachusetts to Maine. Times of high tide in select cities are provided in the graphic below. 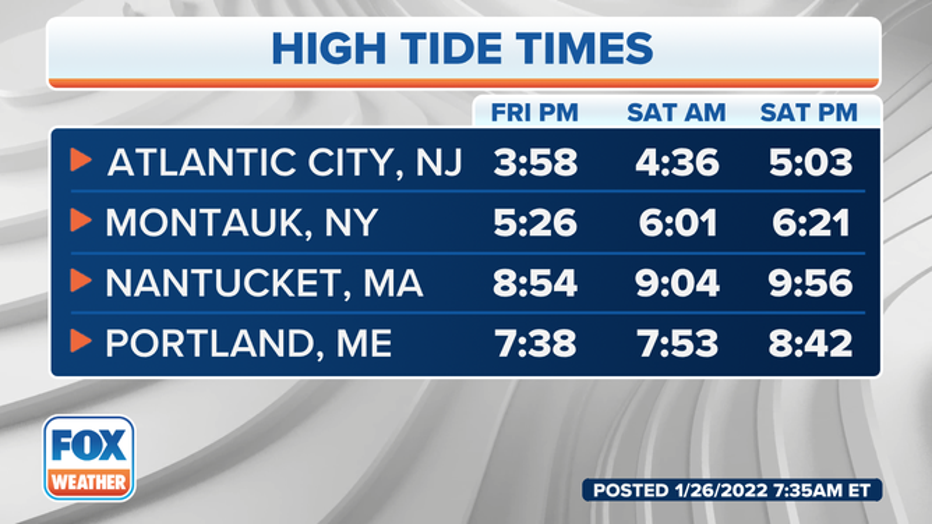 Times of high tide this weekend at select cities along the Northeast coast.

The strongest winds will likely impact eastern and southern New England, where gusts as high as 60 to 70 mph could be strong enough to knock out power, especially over Cape Cod, Martha's Vineyard and Nantucket.

Wind gusts between 30 and 45 mph are predicted from coastal North Carolina northward into the New York City tri-state area, which could still cause at least some power outages. 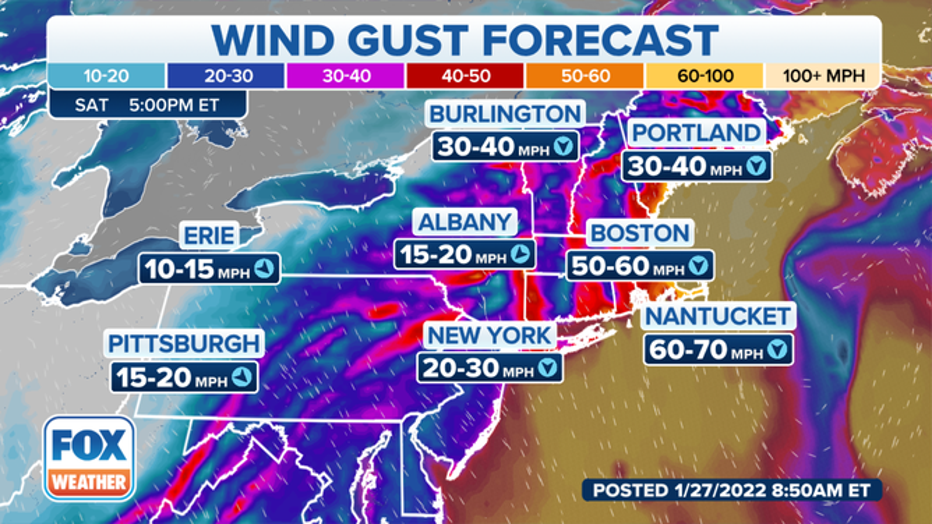 Significant blowing and drifting snow is also possible, which may lead to poor visibility and possibly even blizzard conditions in some areas. Eastern New England has the highest risk of achieving official blizzard criteria.

Some lingering snow is possible in northern New England to start the day, but the low-pressure system will exit into the Canadian Maritimes on Sunday, bringing an end to the snowfall for the rest of the Northeast.

However, bitterly cold temperatures will remain in place across the region for cleanup after the storm.

MILLIONS IN THE EASTERN U.S. TO FEEL WINTER'S COLD GRIP THIS WEEKEND

The highest snow totals, possibly more than a foot in some areas, are expected in eastern and southern New England, especially near the coast.

However, it's still possible that several inches could fall farther south from the New York City tri-state area to the Philadelphia metro area and the coastal mid-Atlantic, particularly south and east of Interstate 95. This remains highly dependent on the exact track of the nor'easter in relation to the East Coast.

There will likely be a very sharp gradient between heavier and lighter snowfall amounts on the western edge of this storm, meaning the Jersey Shore could pick up significantly higher totals than New York City and Philadelphia, and the Delmarva Peninsula could receive far more snow than Baltimore and Washington. 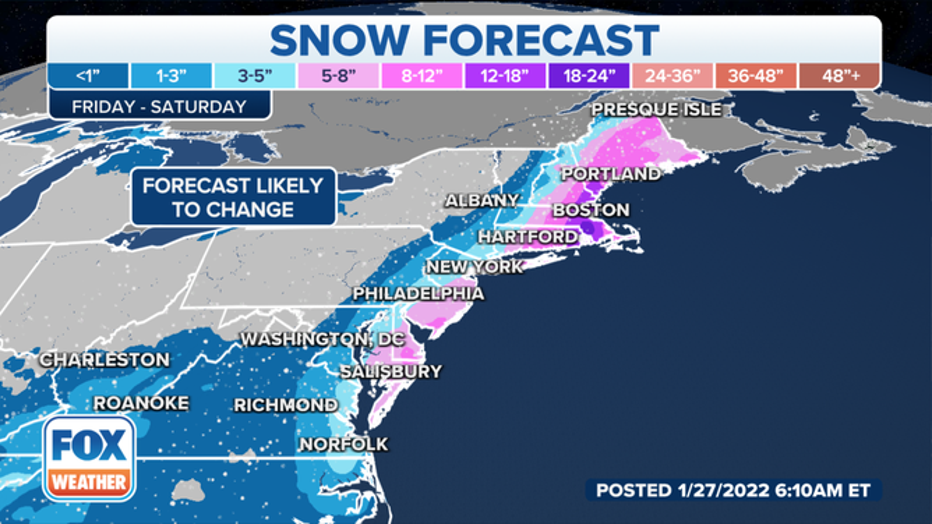 Snowfall forecast from Friday through Saturday.

Keep in mind that forecast changes – possibly significant ones – can be expected as the key details such as the storm's track become clearer over the next day or so.

Download the FOX Weather app for the 24/7 livestream, plus the latest forecast and weather alerts for your location.

LINK: Get updates on this storm from FOXweather.com