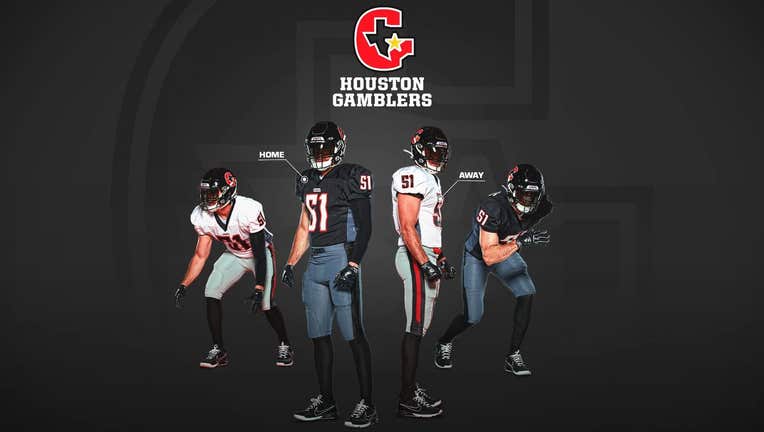 HOUSTON - The Houston Gamblers will be looking sharp when they take the field under head coach Kevin Sumlin later this spring.

The Gamblers, who will make their debut when the USFL begins its inaugural season in April, revealed their new-look uniforms on Thursday morning.

Here's a closer look at the home and away uniforms and the finer details on the jerseys:

And a detailed view of the helmets:

The Gamblers are one of eight teams in the new league, which will play all of its games in Birmingham, Alabama this season. The league begins play on April 16, with the teams split into two divisions, North and South. Each team will play a 10-game schedule, with teams in the same division playing each other twice and teams in the other division once.

The top two teams in each division will play against each other in the semifinals followed a week later by the championship game.

RELATED: Everything you need to know about the USFL

"A new league like the USFL provides opportunities for coaches as well as players, and I’m very excited to have this opportunity to be a head coach at the professional level," Sumlin said. "I love coaching football players. It’s in my blood, and there are many, many athletes who are hungry to play high-quality football. I can’t wait to build my team and work with them this spring."

The Gamblers are just one of the eight teams to reveal their uniforms and helmets on Thursday, one every hour for eight hours. For a roundup of all the uniforms, click here. And to get your official Houston Gamblers merchandise, head over to Shop USFL!

UNIFORM REVEALS: See all eight teams’ home and away jerseys