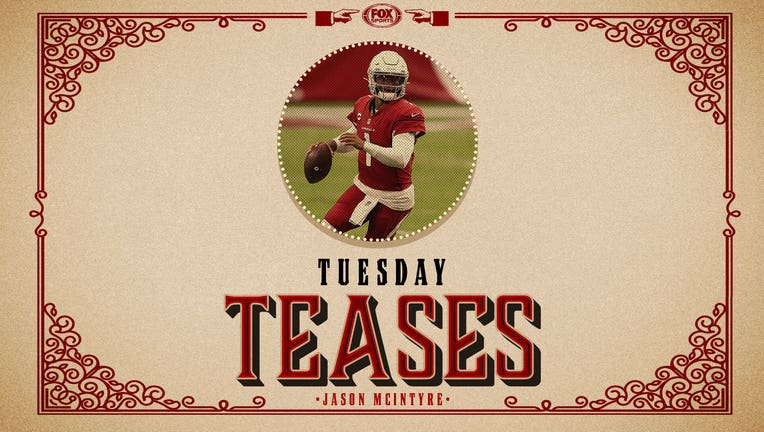 As we nudge past the quarter mark of the 2020 NFL season, Week 5 figures to be the most confusing of the young campaign. (FOX.)

LOS ANGELES - As we nudge past the quarter mark of the 2020 NFL season, Week 5 figures to be the most confusing of the young campaign.

We’ve got a quarterback situation in San Francisco, with Jimmy Garoppolo possibly returning from injury. We have Tennessee coming off an unscheduled bye week due to a COVID-19 outbreak and facing another unbeaten team, Buffalo. What do we make of the Patriots, who lost Cam Newton to a positive COVID-19 diagnosis, and then benched his backup, Brian Hoyer, in a Monday night loss to the Patriots? And as if all that wasn’t enough to make a gambler skittish, the Texans fired coach Bill O’Brien, who as recently as nine months ago was leading the Chiefs 24-0 in the first half of a divisional playoff game.

If all the uncertainty has you feeling cautious, perhaps I can make a case for a fun Hail Mary parlay in Week 5. Instead of “sober October,” I’ve chosen to attempt to go coffee-free this month. I’m that guy who gets a $5 mocha every day, and I’m going to take Monday and Tuesday’s coffee money and drop it into this six-team parlay that would pay out more than $1,000 (with all odds throughout this article via FOX Bet):

Washington (money line) vs LA Rams: The schedule-makers were not kind to Sean McVay. This is the Rams' third trip east in four weeks! They looked sleepy in a non-cover at home against the Giants on Sunday night, and now they face another NFC East cellar-dweller in Washington. This is a perfect spot for a letdown ahead of the Rams' NFC West showdown against the 49ers next week on Sunday Night Football. It’s easy to root for Ron Rivera to pull a major upset as he fights through cancer treatments.

New York Giants (+9.5) at Dallas: The Jason Garrett revenge game. Garrett, who spent nine years as the Cowboys head coach, was booted in the offseason and landed as the Giants offensive coordinator. New York’s offense, which lost Saquon Barkley, has been dreadful. Garrett knows Dallas QB Dak Prescott as well as anyone. Sure, the Giants have lost six straight to the Cowboys, and you’ll need to hold your nose when you make this bet, but the Giants did cover against the Rams and nearly against Pittsburgh, too.

Minnesota +7 at Seattle: Betting against Russell Wilson isn’t for the faint of heart. Doing it at night, in Seattle? Well, that’s downright crazy. The Seahawks won’t lose this game. But can’t Minnesota cover? Every Seattle game seems to come down to late in the fourth quarter with somebody in position to break gambler’s hearts. Kirk Cousins is the man for the job. Gulp!

Arizona -7 at New York Jets: My Jets, a team I’ve supported for three decades now, are a hot mess, inside a dumpster fire, inside a train wreck, to quote a CNN anchor. Mentally, I’m in a good place, and I’ve flipped the switch to “rooting for failure and the No. 1 pick.” This is as good a week as any to embrace that mentality. Would it surprise anyone if Jets players were disappointed Adam Gase hasn’t been fired? The Cardinals show up big this week, unlike last week in Carolina.

Jacksonville (+6) at Houston: How are the winless Texans, who haven’t covered a game yet, favored by this much over anyone? And before you think the Texans firing O’Brien is a win for them from a point spread perspective in the short term ... teams that replace their coach midseason are just 14-22 ATS in their first game with the new coach since 2000. The Jaguars have a plucky offense (10th in yards per play, tied with the Saints, Browns and Ravens) and assuming the injury to their top cornerback, C.J. Henderson, isn’t significant, should be able to more than hold their own at Houston.

Pittsburgh -7 vs Philadelphia: The Eagles are still living off their 2017 Super Bowl victory in the minds of gamblers, because this year’s injury-plagued offense has been dreadful. They are tied with the Jets for last year in yards per play (4.5), and the 49ers were better in every offensive category (first downs, third-down conversions, yards per play, etc) Sunday night.

PUTTING TOGETHER A FOUR-TEAM TEASER

Tampa Bay, Arizona, Pittsburgh and Seattle will be the four teaser teams I’m targeting in Week 5. The reason is simple -- the spreads for those four favorites are between 5.5 and 7.5 points. If the Bucs hit a full touchdown, I’d be able to tease them down through the two most key numbers in the NFL, seven and three.

The Bucs (-5.5 at Chicago on Thursday night) are a team I’ve backed for three consecutive weeks as I refused to overreact to the season-opening loss at New Orleans. The offense, even without Chris Godwin and Leonard Fournette, dropped 38 on the Chargers. But for the first time, the pass defense looked shaky, as Chargers rookie Justin Herbert threw TD passes of 72 and 53 yards. The Bears have no running game to speak of -- David Montgomery has 24 carries for 72 yards combined in the last two weeks -- and now you’re asking immobile Nick Foles to hold up against the Tampa pass rush. Good luck with that.

Arizona (-7 at the Jets) has sputtered since a 2-0 start and is the most risky team in this four-team teaser because it has to travel back to the East Coast after losing in Carolina. When we last saw the Jets defense, it was being torched by undrafted Brett Rypien in his first NFL start to the tune of 242 yards passing, 7.8 yards per-attempt and two TDs. Talk about a get-right spot for Kyler Murray, who didn’t look like an MVP candidate against the Panthers, averaging a paltry 4.3 ypa in a loss. And don’t forget, Jets QB Sam Darnold is nursing a sprain AC joint in his throwing shoulder, and his status is questionable. New York would likely turn to 35-year-old Joe Flacco, who hasn’t thrown a TD pass in his last 94 attempts, dating back to Oct. 6, 2019.

The Steelers (-7 vs. Philadelphia) will be well-rested going up against one of the most injured teams in the NFL. QB Carson Wentz was hit 10 times and sacked three times against the 49ers' JV defense; what will happen against the best pass rush in the NFL, featuring T.J. Watt and Bud Dupree? The beat-up Eagles offense only had two drives against the 49ers longer than 50 yards, and averaged just 4.5 yards per play.

Seattle (-7 vs. Minnesota) is the one I’m least enthusiastic about, only because of the injury status of three defensive starters. It’s one thing to go into Miami missing two starters in the secondary and another at linebacker; it’s another to face the emerging Vikings passing attack of Kirk Cousins, Adam Thielen and rookie Justin Jefferson. Yes, Seattle defeated Miami to improve to 4-0 ATS, best in the NFL, but it wasn’t overly impressive. Ryan Fitzpatrick’s offense averaged 6.1 ypp and only punted once. The Vikings were dreadful for the first two weeks, but have started to unlock the passing game -- and specifically Jefferson -- set up by Dalvin Cook’s tough running. Cook leads the NFL in rushing, and in the last two weeks, Jefferson has 11 receptions for 278 yards, and all of his catches have gone for first downs. Seattle boasts the fourth-most efficient run defense, and the longest rush they’ve allowed this season is 15 yards.

Enter the NFL Challenge contest on the FOX Super 6 app for free and you can win the $100,000 jackpot! Download now at foxsuper6.com!