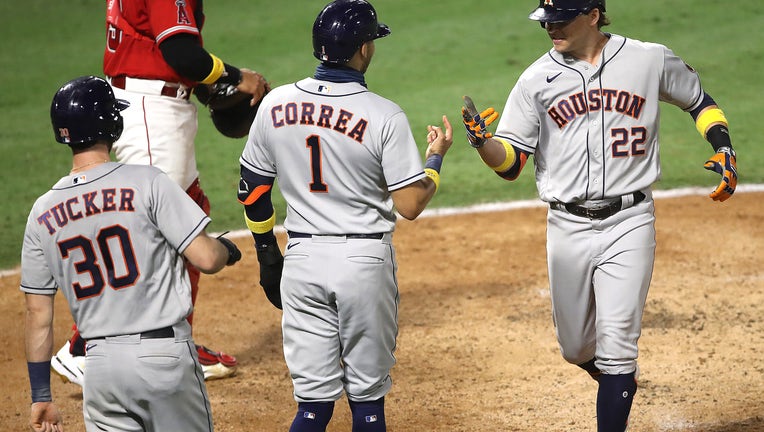 ANAHEIM, CALIFORNIA - SEPTEMBER 05: Carlos Correa #1 and Kyle Tucker #30 congratulate Josh Reddick #22 of the Houston Astros after his three-run homerun during the second inning of the second game of a double header against the Los Angeles Angels at

ANAHEIM, Calif. - Anthony Rendon hit a three-run homer in the seventh inning, Albert Pujols drove in three runs and the Los Angeles Angels rallied for a 7-6 victory over the Houston Astros to sweep Saturday's doubleheader.

It was not a walk-off win for the Angels, though. They were the visiting team in the nightcap because it was a makeup of the Aug. 26 game in Houston that was postponed due to Tropical Storm Laura.

Mike Trout became the Angels' career home run leader with No. 300 in the first game and Jo Adell celebrated with a game-winning, two-run single in the seventh inning to give Los Angeles a 10-9 win.

The Angels have won a season-high four straight following their first doubleheader sweep since 2015.

"It seems like when we get down we are fighting back. We're not giving up and it has been good to see," Trout said.

Rendon hitting homers to sink the Astros is nothing new. He had a three-run shot for the Washington Nationals in Game 6 of last year's World Series and then a solo drive in the deciding game to start the Nationals' comeback.

Rendon did admit there was some brief confusion after his latest homer because the Angels were the visitors. Houston pitcher Humberto Castellanos started to walk off the mound before realizing the game wasn't over.

"Everyone assumes it was the last inning and that was the first thought that crossed our mind. As I was rounding the bases, I realized it is not over yet," Rendon said.

Noe Ramirez (1-0) worked a scoreless sixth to get the win and Ty Buttrey retired the side in order in the seventh for his fifth save.

Los Angeles trailed 6-4 in the seventh. Justin Upton led off with a single and Trout drew a walk to set the stage for Rendon, who drove a changeup from Castellanos (0-1) down the left-field line for his seventh of the season.

George Springer hit two home runs and Josh Reddick also went deep for the Astros, who have dropped three straight after winning 15 of 21.

"We've got to just continue to fight. You've got to be a fighter. That's what it's all about. You've got to fight through tough times. You can either hang your head and quit, or you can tighten your belt up and keep fighting," manager Dusty Baker said.

"We've got a tough road ahead of us in Oakland and then LA (Dodgers). But we need this game very badly tomorrow."

Springer led off the nightcap with a homer to left off Dillon Peters. With the game tied at 4 in the fifth, Springer lined a two-run shot to center that went off Adell's glove when he tried to make a play at the wall.

Reddick had a three-run drive to right-center to extend Houston's lead to 4-0.

Pujols had two hits for the Angels, including a two-run bloop single in the fourth that tied it at 4.

OPENING RALLY
The Angels trailed by two in the opener going into the seventh. Trout and Shohei Ohtani drew walks before Upton doubled in Trout. One out later, Adell lined a two-run single to right off Enoli Paredes (1-2) for his first game-ending hit.

It was Los Angeles' fourth walk-off win of the season, and the first time the team has done it in consecutive games since 2005. The Angels won in 11 innings on Friday.

Trout hit career homer No. 300 in the third inning to pass Tim Salmon as the franchise leader. Trout also had a pair of doubles.

Adell's solo shot in the fourth tied it at 4. Upton connected for a two-run drive in the fifth, tying it at 6.

Kyle Tucker homered and drove in three runs for the Astros, who lost in walk-off fashion for the second straight game.

Houston trailed 7-6 going into the seventh. Myles Straw led off with a double against Felix Pena (3-0) and scored on Michael Brantley's single. With two outs and runners on second and third, Martin Maldonado hit a two-run single to right-center.

BIG DAY FOR TROUT
Trout's drive off Brandon Bielak to right-center brought the Angels to 4-3 in the third.

The three-time AL MVP, who won the award last year, is in his 10th season. The 29-year-old Trout is the 16th player to reach the 300-homer mark before turning 30 and the 11th-fastest by age to do it.

"It means a lot. Once I got within five I started to think about it and when I got No. 299 last night I was definitely thinking about it," Trout said.

Salmon played his entire 14-year career with the Angels from 1992 to 2006 and was part of their only World Series championship in 2002. He is part of the team's broadcast crew and was at Saturday's game.

"I knew the day he signed the extension that he was going to pass it," Salmon said on Fox Sports West after Trout broke the record. "All records are meant to be broken."

In March 2019, Trout signed a 12-year contract worth $426.5 million. Trout saw Salmon in the broadcast booth and acknowledged him between innings.

"That was special. I knew he was up there watching," Trout said.

RECORD HEAT
It was 109 degrees at first pitch, making it the hottest start to a game in Angel Stadium history. The previous mark was 108 degrees on July 6, 2018, against the Dodgers.

It is the seventh game to start with triple-digit temperatures since the ballpark opened in 1966. Four have happened the first week of September.

UP NEXT
The teams close their season series on Sunday. Houston left-hander Framber Valdez (3-2) is sixth in the AL with a 2.58 ERA. Los Angeles right-hander Jaime Barria (0-0, 2.63 ERA) will be making his second start.