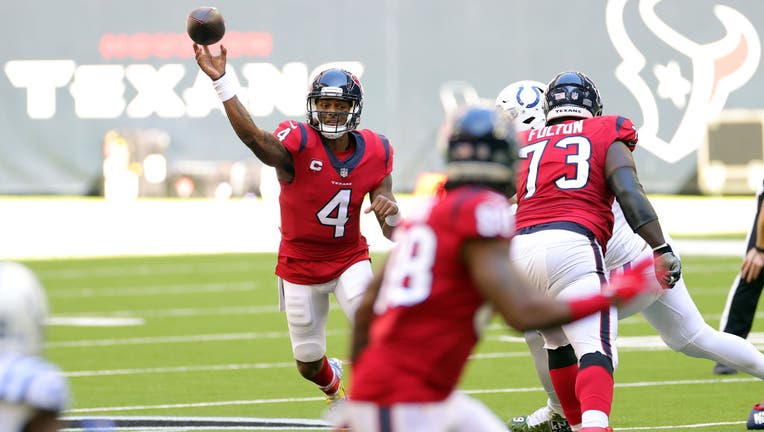 HOUSTON, TEXAS - DECEMBER 06: Deshaun Watson #4 of the Houston Texans attempts a pass against the Indianapolis Colts during the first half at NRG Stadium on December 06, 2020 in Houston, Texas. (Photo by Carmen Mandato/Getty Images)

Philip Rivers threw two touchdown passes in the first half and the Indianapolis defense dominated in the second half, lifting the Colts to a 26-20 victory over the Houston Texans on Sunday.

The Texans had a chance to take the lead with about 90 seconds left. They were at the Colts 2 when Deshaun Watson fumbled a low snap and Anthony Walker pounced on it to seal Indy's win.

The Colts (8-4) led 24-20 at the break after Rivers threw TD passes of 21 and 39 yards. Their offense didn't score after that, but the defense held Houston (4-8) scoreless in the second half and Justin Houston added a safety.

The safety was Indy's third this season and the fourth of Houston's career, tying him for the most in NFL history. Houston also had three sacks, three QB hits and forced a fumble.

Watson threw for 341 yards and ran for a score in the first half. But he did not have a touchdown pass for the first time this season and threw an interception after not being picked off in the last six games.

He seemed stunned after the fumble and sat alone on Houston's bench for several minutes after the game ended.

The Colts had a chance to add to their lead with about seven minutes left, but Jonathan Taylor was stopped for no gain on fourth-and-1 from the Houston 5.

Indianapolis added to its lead three plays later when Houston sacked Watson in the end zone to make it 26-20.

The Colts had two penalties on the ensuing drive and punted to give the Texans that last chance.

T.Y. Hilton had a season-high 110 yards receiving and a touchdown. Taylor ran for 91 yards after missing a game because of COVID-19 contact tracing. Rivers threw for 285 yards.

The Texans were driving late in the third quarter when Kenny Moore ripped the ball out Brandin Cooks' hands as he was falling to the ground. The play was reviewed and upheld as an interception, the first pick off Watson since Oct. 11.

Indy couldn't take advantage of the mistake and had to punt.

The Colts led 7-0 after a 21-yard TD catch by Hilton on their first drive. Houston tied it when Watson scrambled 11 yards for a score later in the first quarter. That score was set up when Watson wriggled out of the grasp of a defender and completed a 64-yard pass to Coutee.

A 52-yard field goal by Ka'imi Fairbairn gave Houston a 10-0 lead late in the first quarter. Nyheim Hines put the Colts up 14-10 on a 5-yard run with less than a minute left in the first.

Fairbairn missed a 53-yard field goal attempt before Indianapolis made it 21-10 on a 39-yard catch-and-run by Taylor. Then Houston got within 21-17 on a 6-yard run by David Johnson, and both teams added field goals to leave Indianapolis up 24-20 at halftime.

INJURIES
Colts: RT Le'Raven Clark was carted off the field in the first quarter with an ankle injury.

UP NEXT
Colts: visit the Raiders next Sunday.

Texans: visit the Bears next Sunday.