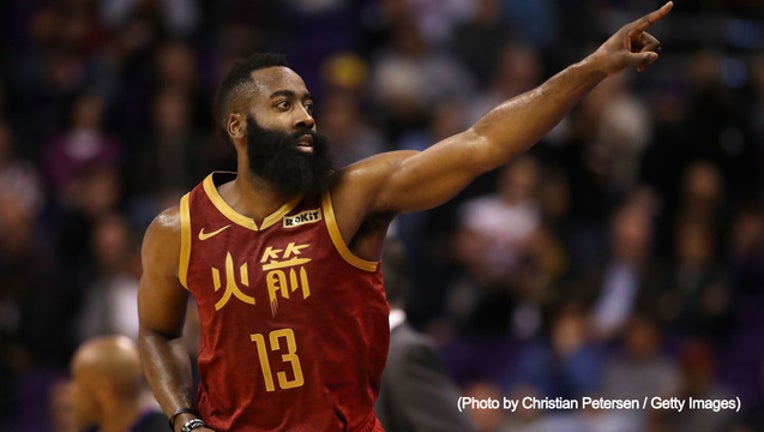 James Harden #13 of the Houston Rockets reacts to a three-point shot against the Phoenix Suns during the second half of the NBA game at Talking Stick Resort Arena in Phoenix, Arizona (Photo by Christian Petersen / Getty Images)

HOUSTON - The Rockets are back home in Houston, looking to leave behind the distractions from their trip to Asia.

Their two games in Japan were overshadowed by the aftermath of a tweet by general manager Daryl Morey in support for anti-government protesters in Hong Kong, angering fans and officials in China.

In their first practice since returning, the Rockets insisted they wouldn't let the fallout distract them from preparing from the season.

"Guys can handle it," coach Mike D'Antoni said. "We still got good work in. Everything's fine, but you know what happened (is) regrettable, and it happened, but as I said, our work will get done."

Veteran P.J. Tucker denied that dealing with this situation has been a distraction to this team trying to contend for its first title since winning back-to-back championships in 1994-95.

"Not really, honestly," he said. "This time of season, everybody's getting in shape, getting ready for the season, focusing in. So with all of the things that go on in life, and whatever, this is still our job, so we still come in and do our job every single day."

The Rockets were in Hawaii on Oct. 4 to play a preseason game against the Los Angeles Clippers on the first leg of a trip that included two games in Japan when Morey tweeted an image that said: "Fight For Freedom. Stand With Hong Kong." His tweet was in reference to pro-democracy demonstrations in the semiautonomous Chinese territory that has been mired in escalating violence between protesters and law enforcement.

The tweet was deleted soon after it was posted, and Rockets owner and billionaire casino and restaurant owner Tilman Fertitta quickly rebuked his GM with a tweet saying that Morey does not speak for the team. He added: "Our presence in Tokyo is all about the promotion of the NBA internationally and we are NOT a political organization."

Despite the swift response from Fertitta, the damage was already done. Former Rockets star Yao Ming took offense to Morey's support for the anti-government protesters and as president of the Chinese Basketball Association, suspended its ties to the Rockets over the tweet.

Events in China promoting the Lakers-Nets series were canceled, NBA media partner Tencent said it was evaluating its plans to cover the league, and China state broadcaster CCTV did not air either preseason game.

The tweet also caused some Chinese corporations to suspend relationships with the NBA and it is unclear what can be done to mend the relationship.

D'Antoni was asked if there is anything the coaches and players can do to help repair things with China.

"We've just got to keep playing and keep trying to be good ambassadors for the game, that's all the players can do," he said. "And then we'll let the NBA and the Houston Rockets sort things out."

Morey hasn't spoken publicly since the tweet, with his only comments on the issue coming in two more tweets on Oct. 6. In those tweets he did not apologize for his initial tweet but did say that his tweets "in no way represent the Rockets or the NBA."

NBA Commissioner Adam Silver backed Morey's right to express his opinion and said: "We are not apologizing for Daryl exercising his freedom of expression."

Morey was at the Toyota Center on Sunday but did not speak to reporters and was not at the small portion of practice that media was permitted to attend. While Morey stayed out of the spotlight it was up to the players and D'Antoni to address how the Rockets can move past what happened.

James Harden understands that as the face of the team, people want him to be a spokesman for the Rockets in all issues, but right now he wants to keep his comments on basketball.

"We've just been focusing on us and getting better," he said. "Whatever is going to happen is going to happen. We focus on what we can control in this locker room ... we had an unbelievable road trip, a great experience in those cities, and now we're back and just trying to get better."