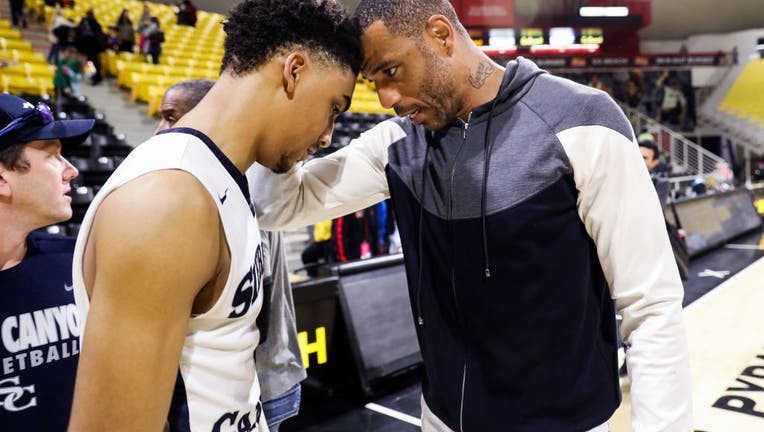 FILE: Kenyon Martin Jr. (L) of the Sierra Canyon Trailblazers shares a moment with his father, Kenyon Martin Sr. (R), after their victory against the Etiwanda Eagles for the CIF State Regional Finals on March 17, 2018 in Long Beach, California. (Photo by Cassy Athena/Getty Images)

Kenyon Martin Sr., who played 15 years in the NBA, could not be more proud and happy that his son, KJ, is following in his footsteps.

KJ is beginning his career as a rookie forward with the Houston Rockets.

Kenyon was the first-overall pick in the 2000 NBA Draft.

Fast forward 20 years later and his son, KJ, was taken by Sacramento in the second round of the 2020 NBA Draft and traded his rights to the Rockets.

“I’m very proud,” Kenyon said in an interview with FOX 26 Sports. “It’s just a testament to his hard work. For you to follow your dreams and put the work behind it, and for that dream to come true for your oldest child, it’s sheer happiness and pride. I’m extremely, extremely proud of him and happy for him.”

And those feelings multiplied in a big way when KJ signed his first professional contract.

“It’s one of those feelings that you really can’t put into words,” Kenyon said. “It’s indescribable. You’re looking at it in the same situation that you were in and this is a dream of his. I’m ecstatic.”

While his son’s name is Kenyon Martin Jr, the younger Martin wants to be known simply as KJ Martin.

His dad thinks that is great.

“I love it that he wants to have his own identity because his game is different than mine,” Kenyon said. “It’s not me.

“It’s his own identity. This is about him. This is his career. When he dotted that line, it’s starting. When he got drafted that was a great step in the right direction.”

And speaking of the Martin name, Kenyon said it was important that the name on the back of KJ’s jersey did not cause him any extra pressure.

“My name, that name, doesn’t mean anything,” Kenyon said. “That’s my name. You earn your name and he did.

“Because it wasn’t about me, it’s about him.”

KJ, at age 19, is the Rockets' youngest player.

He joins the Rockets after spending a year with the IMG Academy’s post-graduate team, averaging 19.6 points and 8.3 rebounds this past season.

“Before he went down to IMG, I can count how many basketball games that I had missed up to that point, which was like maybe one AAU game,” Kenyon said. “So to see his growth and to see the time that he put into it and for him to not tune me out and to listen when I’m helping him, when I’m criticizing him when I’m critiquing him, all those things, he never tuned me out, because it was all to help him accomplish his goals and that was to make it to the NBA.

“Now we’re here and to see all the hard work he put in, all the travel, all the criticism, all the hate, all the disrespect, all of that stuff, to come to this point, for him to sign his first contract, great.”

Kenyon said his son did not get the respect he deserved from those who ranked high school basketball players.

“They had my son ranked like 237 in his class,” Kenyon said. They had him as a three-star, on one of the best teams, with some of the toughest basketball and he’s not just on the team. They won back-to-back state championships.

“He used that as fuel, because he’s playing against these guys.”

And Kenyon enjoyed helping his son become the player that he is.

“I have an extremely high IQ for the game of basketball and I can articulate it to a child,” Kenyon said. “I can articulate it to somebody who never played it, somebody who’s played it, coaches, media, whoever. I process it on the fly. So when I run plays back for (KJ) that happened during the course of his game and he’s like ‘you remember that,’ you can’t help but to listen to that.

“I’m one of the most honest people that you want to get when it comes to the game of basketball. Me being me nice and sugarcoating it is not helping you.”

Kenyon believes it is important that his son has joined a team that has veterans like James Harden, John Wall, PJ Tucker, Eric Gordon and DeMarcus Cousins.

I love it,” Kenyon said. “I would prefer him to be here than on a team where the oldest guy is 26. We talk about that all the time.. I love him in a situation where the guys have double-digit years in.”

Kenyon is looking forward to watching his son in a Houston Rockets uniform.

“I’m a fan. I’m a fan,” Kenyon said. “I’m his dad, but I tell people this now, if I was just going to watch a basketball game and he wasn’t my son and he was playing in it, I like what I see.  My son is there. I’m a Rocket. You’re gonna see a lot of me cheering him on.