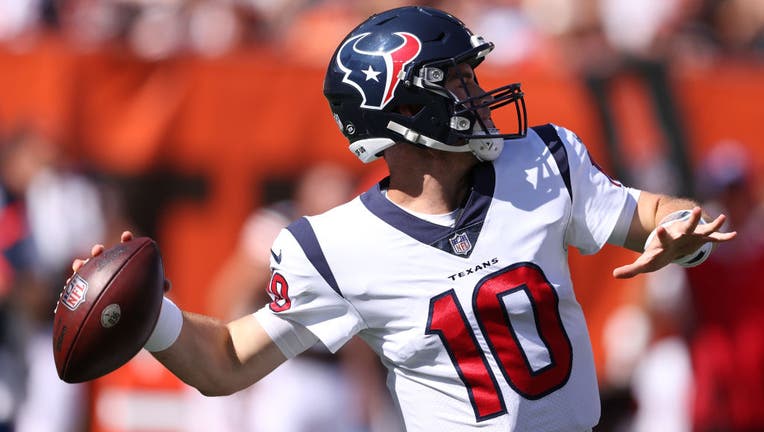 CLEVELAND, OHIO - SEPTEMBER 19: Davis Mills #10 of the Houston Texans plays against the the Cleveland Browns at FirstEnergy Stadium on September 19, 2021 in Cleveland, Ohio. Cleveland won the game 21-31. (Photo by Gregory Shamus/Getty Images)

HOUSTON - Rookie Davis Mills will start at quarterback for the Houston Texans on Thursday night against the Carolina Panthers with Tyrod Taylor out with a hamstring injury.

Coach David Culley announced the decision Tuesday and said Taylor would be inactive. Later Tuesday the Texans placed Taylor on injured reserve which means that he must miss at least three games.

Culley said the Texans plan to promote Jeff Driskel from the practice squad to back up Mills against the Panthers (2-0).

Taylor was injured in the first half of Houston’s 31-21 loss to Cleveland on Sunday and didn’t return after halftime. Mills, a third-round pick from Stanford, took over and threw for 102 yards with a touchdown and an interception.

Deshaun Watson was not an option to fill in in the wake of Taylor’s injury after Culley said Monday that he would be inactive for Thursday’s game just as he has been for the first two games.

RELATED: No resolution to Deshaun Watson dilemma as he stays on Houston Texans roster

Watson has been listed as inactive/not injury-related following his trade request and after 22 women filed lawsuits alleging sexual assault or harassment.

Before Taylor was put on IR, Culley said the Texans (1-1) could explore signing another quarterback next week if Taylor remains out.

Rookie receiver Nico Collins was also placed on injured reserve Tuesday. Collins, who was a third-round pick in this year’s draft, has a shoulder injury.