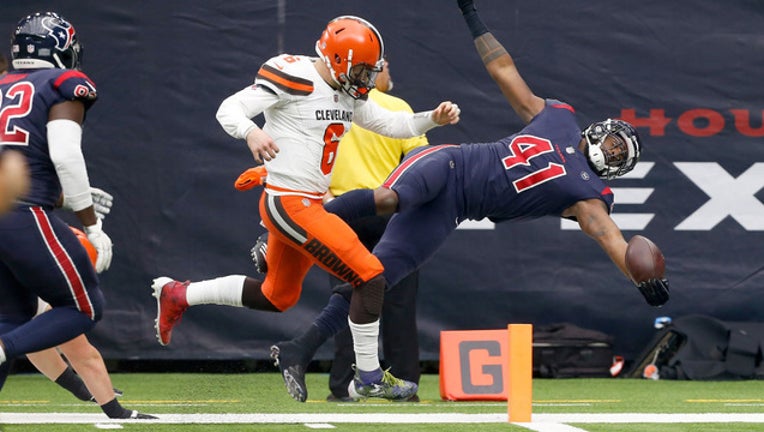 HOUSTON, TX - DECEMBER 02: Zach Cunningham #41 of the Houston Texans intercepts Baker Mayfield #6 of the Cleveland Browns for a touchdown in the second quarter at NRG Stadium on December 2, 2018 in Houston, Texas. (Photo by Bob Levey/Getty Images)

HOUSTON (AP) - Deshaun Watson threw a touchdown pass and the Houston Texans intercepted rookie Baker Mayfield three times, returning one for a score, to extend their franchise-record winning streak to nine games with a 29-13 victory over the Cleveland Browns on Sunday.

Houston raced out to a 23-0 halftime lead and added two second-half field goals by Ka'imi Fairbairn to give him five on Sunday.

He finished with 397 yards passing and had a touchdown pass in the fourth quarter after throwing a career-best four in a win over the Bengals last week. Houston's fearsome pass rush, led by J.J. Watt and Jadeveon Clowney didn't sack Mayfield, but they hurried and harassed him for much of the day.

Houston was up 3-0 after an early field goal when Watson, who finished with 224 yards, connected with rookie Jordan Thomas on an 11-yard touchdown pass. DeAndre Hopkins set up that score when he made a 24-yard reception after T.J. Carrie grabbed his dreadlocks in an attempt to slow him down two plays earlier.

Zach Cunningham made it 17-0 when he grabbed his first career interception and ran 38 yards for a touchdown in the second quarter. Officials first ruled him down at the 1, but the play was reviewed and changed to a touchdown.

Kareem Jackson was called for a 47-yard pass interference penalty on Cleveland's next drive to put the Browns at their 20. But Mayfield threw another interception two plays later and it was returned 18 yards by Johnathan Joseph.

Houston added another field goal to make it 20-0 with about three minutes left in the second quarter.

Mayfield's third interception came late in the second quarter when Andre Hal grabbed the ball in the end zone.

Lamar Miller had 103 yards rushing for his second straight 100-yard game and fourth of the season and Hopkins had seven receptions for 91 yards.

Cleveland continued to struggle in late-season games, and the Browns fell to 9-39 in December and January games since 2008.

Nick Chubb got the Browns on the board in the third quarter when his 2-yard TD run cut the lead to 23-7 with about 9½ minutes left. Rashard Higgins had a 17-yard touchdown reception in the fourth quarter, but the 2-point conversion failed to leave the Browns down 29-13.

Houston added another field goal after that before a mistake-filled possession by the Browns. First Mayfield threw what looked to be a 76-yard touchdown pass to rookie Antonio Callaway, but it was brought back because of a holding penalty by left tackle Greg Robinson.

Two plays later, Mayfield connected with Callaway again and he gained 71 yards before rookie Justin Reid chased him down from behind and knocked the ball out of his hands just before he would have scored. It bounced into the end zone where it was recovered by the Texans.

Browns: Host the Panthers next Sunday.

Texans: Host the Colts next Sunday.