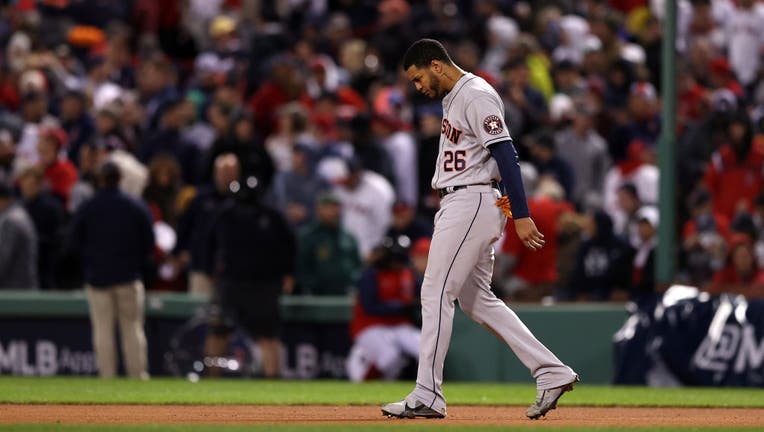 BOSTON, MASSACHUSETTS - OCTOBER 18: Jose Siri #26 of the Houston Astros walks to his position after making the final out of the seventh inning of their game against the Boston Red Sox in Game Three of the American League Championship Series at Fenway

BOSTON - The Houston Astros are now down 2-1 in the American Lague Championship series after losing Game 3 to the Boston Red Sox at Fenway Park in Boston on Monday night by a final score of 12-3.

Game 3 started as a slight case of déjà vu for the Astros as the bottom of the second inning was active for the Boston Red Sox.

With the Red Sox already ahead 2-0, Red Sox first-baseman Kyle Schwarber knocked a grand slam to right field, to extend the Red Sox lead to 6-0.

In the bottom of the third, the Red Sox bats continued to stay hot. With the score 7-0, Christian Arroyo knocked a two-run home run over the Green Monster in left field. Red Sox build their lead to a score of 9-0.

In the top of the fourth, the Astros bats came alive after Kyle Tucker knocked a three-run home run into right field, scoring Michael Brantley and Yordan Alvarez.

In the bottom of the sixth inning with the score 9-3, a two-run home run by J.D. Martinez over the Green Monster in left field extended the Red Sox lead to 11-3.

The bottom of the eighth inning saw another home run by the Red Sox by Rafael Devers, once again over the Green Monster in left field. Score: 12-3 Red Sox.