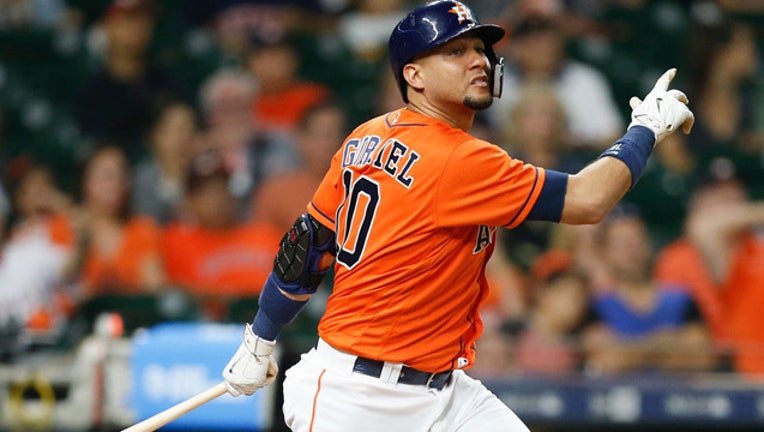 Yuli Gurriel #10 of the Houston Astros hits a grand slam in the first inning against the Los Angeles Angels of Anaheim at Minute Maid Park on September 21, 2018 in Houston, Texas. (Photo by Bob Levey/Getty Images)

HOUSTON (FOX 26) - With the Houston Astros defeating the Los Angeles Angels 11-3 on Friday night, the club has officially clinched a 2018 Postseason berth. The Astros Team Store Postseason Clinch Event will remain open to the public at the Union Station Team Store until 3 p.m. Saturday. The special retail event is the very first opportunity for Astros fans to purchase their 2018 Astros Postseason merchandise.

The playoff berth is the third for the Astros in the last four seasons as the club aims to win back-to-back championships.

The Astros Union Station Team Store will host several special activities throughout the shopping event, including visits from the Coca-Cola Shooting Stars, hourly drawings, gifts-with-purchase, free coffee and doughnuts, games, merchandise giveaways, and a grand prize of a $500 shopping spree to the Astros Team Store.

Yuli Gurriel hit a grand slam and a two-run homer on his way to a career-high seven RBIs, and the Astros routed the Angels.

George Springer added a three-run shot in the eighth for the Astros, who are still looking to secure the AL West title. The defending World Series champions began the day with a 3 1/2-game lead over second-place Oakland.

Houston starter Gerrit Cole (15-5) allowed three hits and three runs in seven innings in his fifth straight win. He also struck out 12, giving him 1,006 for his career and moving him in front of teammate Justin Verlander (269) for most in the AL this season with 272.

Gurriel hit his third career grand slam in the first inning. He connected for his 12th homer against Andrew Heaney (9-10) in the third and singled in Tyler White in the fifth.

It was his first career multihomer game. His brother Lourdes Gurriel Jr. also homered twice for Toronto on Friday night, marking the first time in major league history that brothers had multihomer games on the same day.

Gurriel's seven RBIs were the most for a Houston player since J.R. Towles set a franchise record with eight 11 years ago on Friday.

Mike Trout homered for the second straight game for the Angels, who lost their third in a row. They have allowed 42 runs combined in those three losses.

The AL East champion Red Sox (105-49), playing without several of their regulars, matched the club mark set in 1912.

Trevor Bauer took a step toward being in Cleveland's postseason rotation, pitching 1 1/3 scoreless innings in his first appearance since breaking his right leg on Aug. 11. He was 12-6 with a 2.22 ERA when was struck on the lower leg by a line drive hit by Jose Abreu of the Chicago White Sox.

Boston ace Chris Sale, being eased back into the rotation after recent shoulder trouble, struck out seven in 3 1/3 innings. He allowed two runs in his third start back from the disabled list.

Josh Donaldson homered off Sale in the fourth, ending the lefty's 35-inning consecutive scoreless streak. It was the first homer off Sale in 75 innings.

The Red Sox used nine pitchers against the AL Central champion Indians. Matt Barnes (6-3) pitched a scoreless sixth and Craig Kimbrel worked the ninth for his 42nd save.

Mookie Betts, Xander Bogaerts, Andrew Benintendi and Jackie Bradley Jr. were out of Boston's lineup. Rafael Devers homered and Travis, who had three RBIs, for the Red Sox, who used a four-run seventh to erase a 4-2 deficit.

NEW YORK (AP) - CC Sabathia won for just the second time since the All-Star break, Didi Gregorius and Aaron Hicks hit two-run homers and the Yankees built a six-run lead to beat Baltimore and close in on their second straight AL wild card.

Luke Voit added a two-run single to give him 24 RBIs in 31 games with the Yankees, and Hicks scored four runs. After Baltimore closed to 9-8 in the eighth, Aaron Judge doubled in a run for his first RBI since returning from the disabled list on Sept. 14.

New York lowered its magic number to two over Tampa Bay for ensuring a wild-card game on Oct. 3, most likely against Oakland. The Yankees began the night 1½ games ahead of the Athletics for home-field advantage.

Baltimore dropped to a major league-worst 44-109, overtaking the 1937 St. Louis Browns for second-most losses in franchise history behind the 111 of the 1939 Browns.

ATLANTA (AP) - The Atlanta Braves moved to the brink of their first NL East title since 2013, bouncing back from Ronald Acuna Jr.'s defensive blunder with a five-run seventh inning.

Ozzie Albies sparked the comeback with a two-run homer and Johan Camargo finished it off with a two-out, two-run single, giving the Baby Braves a chance to celebrate as soon as Saturday afternoon with one more victory over the second-place Phillies.

Acuna misjudged Wilson Ramos' liner to left in the top half of the seventh, turning what should have been an out into a two-run double. Pinch-hitter Jose Bautista tacked on a run-scoring single, giving the Phillies a 4-1 lead.

Tyler Flowers led off the bottom half with a single off Pat Neshek (3-2), and Albies followed with a drive into the right-field seats for his 23rd homer. Dansby Swanson walked and Lucas Duda followed with a pinch-hit single before Neshek finally got an out - on a grounder that bounced off the third-base bag and was backhanded by Asdrubal Cabrera, who threw home to get Swanson trying to score.

Ender Inciarte hit a run-scoring double into the right-field corner. With two outs and the bases loaded, Camargo came through on a 3-2 pitch by lining a two-run single to left to put the Braves ahead for the first time all night .

Jonny Venters (4-0) claimed the win by getting the final two outs in the seventh. A.J. Minter earned his 15th save despite giving up a run in the ninth.

Pham walked twice, tripled and added a sacrifice fly as the Rays bounced back from a tough, 9-8 loss Thursday, when the Blue Jays scored seven runs in the bottom of the ninth inning for the victory. Tampa Bay has not lost consecutive games since Aug. 17-18 at Boston.

Gurriel's older brother, Yuli, hit two home runs for Houston on Friday night. They are the first brothers in major league history to have multihomer games on the same day.

Jalen Beeks (5-1) allowed two runs in three innings, Adam Kolarek worked 1 2-3, Hunter Wood got one out, and Austin Pruitt pitched the final three innings for his third save.

Alex Gordon had three hits for the Royals, who led 4-0 after four innings.

The Tigers committed three errors while losing for the eighth time in 11 games.

Kennedy (3-8) won his second straight start, permitting two earned runs and seven hits in seven-plus innings. He struck out six and walked none.

Galloway drove David Hernandez's 3-2 slider past right fielder Phillip Ervin to plate Anderson, who had reached on a double to right.

Kyle Barraclough (1-6) retired the final two batters in the top of the 10th.

Hernandez (5-2) relieved Luis Castillo with two on and one out in the ninth, retiring Peter O'Brien on a double play.

Castillo allowed five hits, struck out five and walked one in his 8 1/3 innings, his longest start of the season.

Wei-Yin Chen pitched seven innings of three-hit ball for the Marlins, striking out eight in his final home start of the season. Chen finished with a 1.62 ERA in 13 starts at Marlins Park.

CHICAGO (AP) -Chicago played without shortstop Addison Russell after he was accused of domestic violence by his ex-wife, and they were unable to overcome a shaky performance by Jose Quintana in a loss to the White Sox in a crosstown matchup.

Russell was placed on administrative leave by Major League Baseball after a blog post attributed to Melisa Reidy contained detailed allegations of years of physical and emotional abuse. The 24-year-old Russell can challenge the leave before an arbitrator, and the leave can be extended for additional seven-day periods if the union agrees. He continues to be paid his $3.2 million salary.

Quintana (13-11) was charged with five runs and nine hits in five-plus innings against his former team. The left-hander had been pitching well, going 3-1 with a 2.10 ERA over his previous six starts.

WASHINGTON (AP) - Jacob deGrom turned in a record 23rd consecutive quality start, lowered his ERA to 1.77 and boosted his record to .500 as he bids to earn the NL Cy Young Award, allowing one run in seven innings for the Mets.

Throwing fastballs in the 97-99 mph range, deGrom (9-9) struck out eight and walked one while allowing just one run and three hits, all singles. Bob Gibson (in 1968) and Chris Carpenter (2005) each had single-season runs of 22 quality starts, the previous major league mark.

The right-handed deGrom has given up as many as four earned runs in only one of his 31 starts in 2018, back on April 10 against Miami. He's now up to 28 in a row allowing three runs or fewer, the longest single-season streak in major league history.

So this game was pretty much wrapped up by the third inning, which ended with the Mets ahead 4-1. Jay Bruce had two run-scoring hits, and Devin Mesoraco and Dominic Smith also delivered RBIs, all off Joe Ross (0-1).

Robert Gsellman worked around Anthony Rendon's RBI single in the ninth for his 12th save.