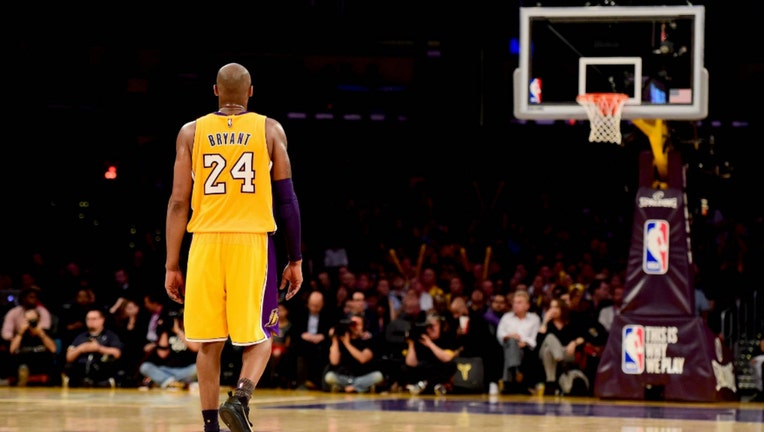 Kobe Bryant #24 of the Los Angeles Lakers reacts while taking on the Utah Jazz at Staples Center on April 13, 2016 in Los Angeles, California. (Photo by Harry How/Getty Images)

On Monday night, ESPN will re-air Kobe Bryant’s final NBA game to honor the Lakers legend after he and his 13-year-old daughter were killed in a helicopter crash Sunday morning.

In Kobe's final game, he went out in style dropping 60 points against the Utah Jazz. The game took place on April 13, 2016.

Kobe and his daughter, Gianna, were among nine people killed Sunday morning after their helicopter crashed in Calabasas, which is about 30 miles from downtown Los Angeles.

Originally from Philadelphia, Kobe was drafted straight out of high school by the Charlotte Hornets with the 13th overall pick in the first round of the 1996 draft. The Hornets traded him to the Lakers, where he played until he retired in 2016.

In the 20 years in the NBA, he won 5 NBA Finals including being named Finals MVP twice. He also was voted to the All-Star Team 18 times and scored 81 points in one game against the Toronto Raptors in 2006. That was the second-highest point total in NBA history behind only Wilt Chamberlain's 100 points.

Kobe also won two Gold Medals in the Olympics, in 2008 and 2012. After he retired in 2016, the Lakers retired both number 8, the jersey he wore for the first ten years of his career, and 24, the number he wore for the final ten years. He's the only Laker to have two numbers retired.

Kobe and Gianna are survived by his wife Vanessa, and their three other daughters -- Natalia and Bianca and their newborn Capri.

Bryant had one of the greatest careers in recent NBA history and became one of the game’s most popular players as the face of the 16-time NBA champion Lakers franchise. He was the league MVP in 2008 and a two-time NBA scoring champion, and he earned 12 selections to the NBA’s All-Defensive teams.

Bryant looms large over the current generation of NBA players. After LeBron James passed Bryant on the all-time scoring list on Saturday, he remembered listening to Bryant when the superstar came to speak at a childhood basketball camp.

“I remember one thing he said: If you want to be great at it, or want to be one of the greats, you’ve got to put the work in,” James said. “There’s no substitution for work.”