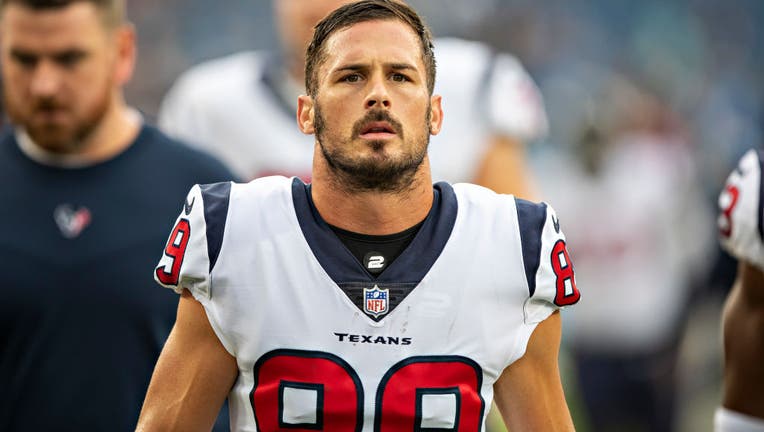 FILE: Danny Amendola #89 of the Houston Texans warms up before a game against the Tennessee Titans at Nissan Stadium on November 21, 2021 in Nashville, Tennessee. The Texans defeated the Titans 22-13. (Photo by Wesley Hitt/Getty Images)

Danny Amendola, a two-time Super Bowl champion with the New England Patriots, announced his retirement Monday after a 13-year career as a wide receiver.

Amendola was an undrafted free agent when he latched on with the St. Louis Rams in 2009. He played four years with the Rams before joining the Patriots and helped the team win two championships with Tom Brady, Rob Gronkowski and Julian Edelman.

He would bounce around from 2018 to 2021. He played for the Miami Dolphins, Detroit Lions and Houston Texans before deciding to call it quits this week.

He tweeted a video highlight package of his career, writing "Wouldn't have it any other way."

Amendola told ESPN he is pursuing other interests, including a potential move to broadcasting.

He is the latest player from the Patriots dynasty to retire.

Edelman retired prior to the start of the 2021 season and, even with the teasing with Brady about possibly joining the Tampa Bay Buccaneers last season, he remained on the sidelines.

Brady initially said he was going to step away from football at age 44 earlier this year after the Buccaneers lost to the Los Angeles Rams in the playoffs. About a month later, however, he revealed he was outmatched by his competitive spirit and decided to give it another go for his age 45 season.

Gronkowski announced his retirement from the NFL in June. So far, he has pushed back on speculation he would return to the Buccaneers if Brady came calling. Whether it is Tampa or somewhere else, the last stop in his NFL journey will be Canton, Ohio and the Pro Football Hall of Fame.