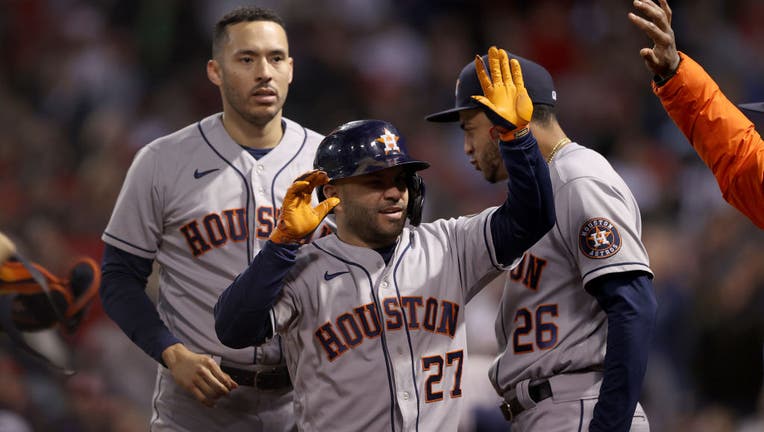 BOSTON, MASSACHUSETTS - OCTOBER 19: Jose Altuve #27 of the Houston Astros is congratulated by teammates after he scored in the ninth inning against the Boston Red Sox in Game Four of the American League Championship Series at Fenway Park on October 1

BOSTON - The Houston Astros bats and their bullpen came to play during Game 4 of the American League Championship Series at Fenway Park in Boston Tuesday night.

The Astros won the game 9-2 and tie the series 2-2 after strong pitching by Cristian Javier and Phil Maton.
The Houston Astros struck first in the with a solo home run by Alex Bregman over the Green Monster in left field in the top of the first inning.

However, the Red Sox answered quickly in the bottom of the first inning when Xander Bogaerts knocked a two-run home run over the Green Monster in left field.

it was all about pitching for both clubs with monster strikes thrown in the middle of the game. Some stellar defense by the Astros kept the high-powered offense, which the Boston Red Sox displayed on Monday night, at bay.

It wasn’t until the top of the eighth inning when Jose Altuve slammed a solo home-run over the Green Monster to tie the game at 2-2.

Then in the top of the 9th inning with two on base and two out for the Astros, Jason Castro knocked in a run after a single to right field to put the Astros up 3-2.

After the bases were loaded and a pitching change by the Red Sox, Michael Brantley knocked a 3-run double into right field to clear the bases and put the Astros up 6-2.

After Bregman was given the pass to first base, Alvarez knocked a single into left field, scoring Brantley and extending the Astros’ lead to 7-2.

Another run was scored after a hit by Correa, making the lead 8-2 Astros.

The next batter, Justin Tucker knocked a deep hit into right field, scoring another run as the lead continued to grow, 9-2 Astros by the middle of the ninth inning.

Astros pitcher Ryan Pressly came in from the bullpen in the bottom of the ninth to seal the deal for the Astros.