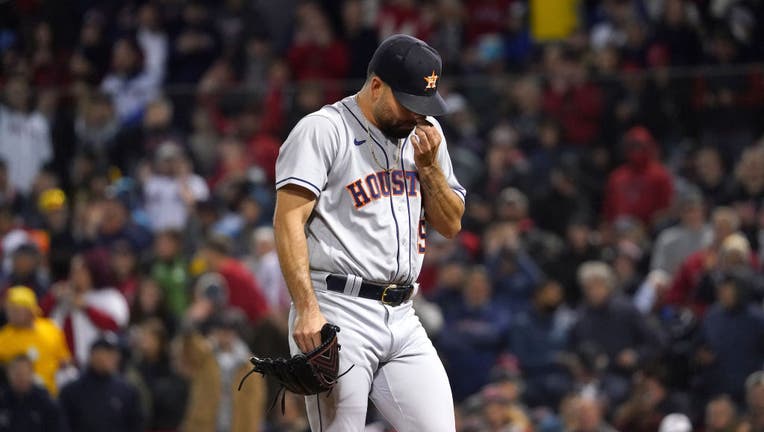 Boston - October 18: Astros starting pitcher Jose Urquidy in the second inning. The Boston Red Sox host the Houston Astros for Game 3 of the ALCS at Fenway Park in Boston on Oct. 18, 2021. (Photo by Barry Chin/The Boston Globe via Getty Images)

BOSTON - Houston’s pitching staff will need to adjust quickly after allowing 25 runs and 32 hits to Boston in the first three games of the AL Championship Series, a barrage that made the loss of injured Lance McCullers Jr. seem acute.

Kyle Schwarber hit Boston’s third grand slam in an 11-inning span, a drive off starter José Urquidy as part of a six-run second inning in Monday night’s 12-3 rout that gave the Red Sox a 2-1 series lead.

CLICK HERE FOR THE LATEST FROM THE HOUSTON ASTROS

Boston hit four home runs, raising its total to nine off Astros pitching, which has a 7.96 ERA.

"It’s kind of like Groundhog Day, a reoccurring nightmare where you hope to get some innings out of these guys," Astros manager Dusty Baker said.

The Houston Astros are now down 2-1 in the American Lague Championship series after losing Game 3 to the Boston Red Sox at Fenway Park in Boston on Monday night by a final score of 12-3.

The Astros’ bullpen has pitched 15 1/3 innings in the last two games, and Baker figures to need to go to relievers early once again in Game 4 on Tuesday night.

Luis Garcia’s early exit from Game 2 forced Baker to use projected Game 4 starter Jake Odorizzi for four innings of relief, taking him out of the mix to get the ball Tuesday. Zack Greinke will start, two days shy of his 38th birthday, and likely backed up by a fresh Cristian Javier.

"As long as he can go. As long as his endurance is fine," Baker said of Greinke.

Greinke is coming off two stints on the injured list last month, one for a positive COVID-19 test and another for neck soreness. He’s thrown 49 big league pitches in two total outings over the past four weeks, giving up five home runs in his last 12 1/3 innings.

And he hasn’t gotten an out in the sixth inning since Aug. 23.

Minute Maid Park is open to fans for watch parties as the Astros play at Fenway Park for ALCS Games 3 and 4.

He will be facing a Boston lineup that has 18 home runs in its last six games and 20 total this postseason.

Houston’s 4.06 bullpen ERA was seventh in the AL during the regular season. The relievers will have to rebound if the Astros are to extend the series back to Texas.