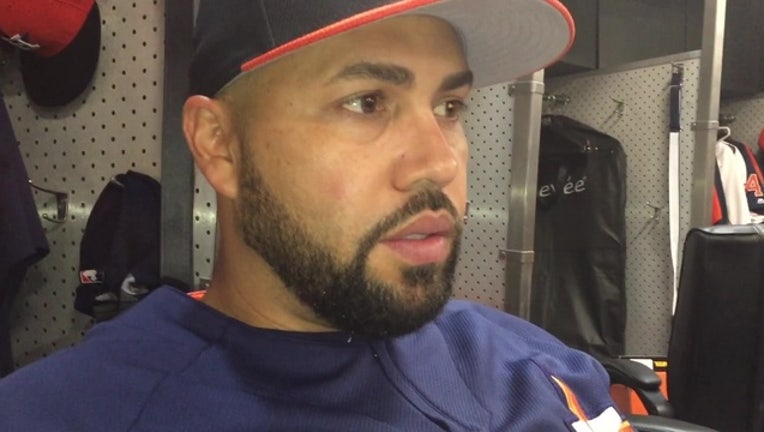 MINNEAPOLIS (AP) - Once Carlos Beltran and the Houston Astros began battering away, there was no relief for Minnesota's beleaguered bullpen.

Beltran homered and singled during an 11-run burst in the eighth inning and Houston overwhelmed the Twins 16-8 Monday in a matchup of AL division leaders.

The Astros won their fifth in a row, improving the best record in the majors.

"We have shown that, no matter how far behind in the game we fall, we're going to try to preach good at-bats and I think that's what we did," Beltran said. "We were able to put good at-bats out there and got good results."

The Astros combined eight hits, two walks, a hit batter and a balk in the eighth to rally from an 8-2 deficit. The Twins tried three pitchers in the inning, a day after they used eight relievers in a 15-inning loss to Tampa Bay.

"We were affected by yesterday's game in what we could do today. The guys we had were a little bit taxed," Twins manager Paul Molitor said.

Beltran finished with four hits and Carlos Correa had three, including a home run. Alex Bregman also homered for Houston, which had a season-high 18 hits, 13 of them in the last two innings.

Jordan Jankowski (1-0) got his first major league win with 2 1/3 innings in relief of starter Brad Peacock. He allowed four earned runs and gave up home runs to Miguel Sano and Robbie Grossman but he benefited from the Houston hit parade.

But Ryan Pressly faced six hitters and got just one out, with Marwin Gonzalez's two-run single pulling the Astros to within 8-6. Breslow was up next and eventually Matt Belisle took over and gave up Beltran's three-run homer.

Pressley, Breslow and Belisle each made their third appearance in four days.

The Astros have a double-digit lead in the AL West and their confidence seems to grow with every victory.

"I don't think we ever think we're down and out of a game," said Josh Reddick, whose two-run double put the Astros ahead for good. "Yeah, it was frustrating the way they swung the bats against us and they took a huge lead. But we know what we can do. We've seen it before."

Molitor said he was reluctant to send DH/first baseman Kennys Vargas back to the minor leagues after Sunday's game, but the team needed help in the bullpen and Vargas was one of the Twins' few position players who still had options available. With reliever Justin Haley going on the 10-day DL, the Twins were able to add two pitchers, right-hander Drew Rucinski and lefty Jason Wheeler, both from Triple-A Rochester.

However, Molitor was reluctant to use either of the fresh arms, even with an 8-2 lead in the eighth inning. He explained his decision after the game, saying, "When (you're facing) one of the best offensive teams in the game with a six-run lead, you're going to go with your experience and guys that you feel should get people out."

Rucinski did pitch the ninth inning and gave up three runs once the game was out of hand. After the game, the Twins sent him back to Rochester and recalled lefty Buddy Boshers.

Correa is now 12 for 21 in his last five games and has had multiple hits in each of them. After a slow start, his batting average is a season-high .311. Meanwhile, Sano had gone 1 for 18 with 13 strikeouts before launching his homer in a seven-run fifth.

Astros: Manager A.J. Hinch left the bench during the game due to an illness.

Twins: OF Byron Buxton left the game in the sixth inning with a lacerated ring finger on his right hand. He is considered day-to-day.

Astros: RHP Mike Fiers (1-2, 5.21 ERA) will face the Twins after temporarily losing his spot in the starting rotation. Fiers gave up 10 hits in 4 2/3 innings against the Tigers on May 25, but he'll fill Morton's spot for at least one turn through the rotation.

Twins: RHP Jose Berrios (3-0, 1.66) is coming off his worst start of the year, but with him that's a relative term. After two dominant outings, Berrios gave up three runs in 6 1/3 innings in a win at Baltimore on May 24.