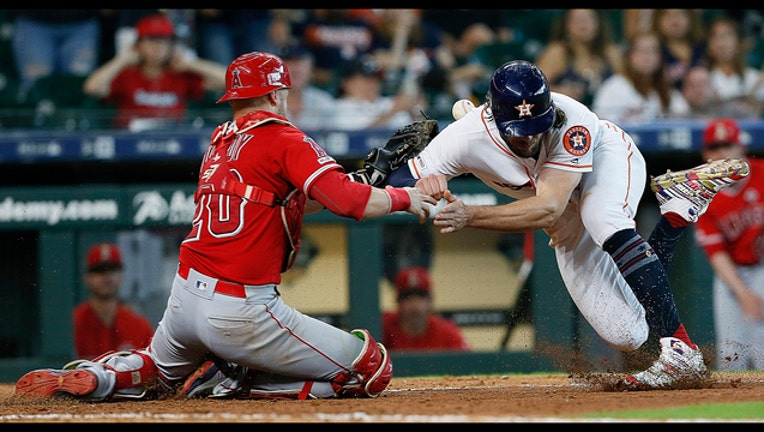 Jake Marisnick of the Houston Astros collides with Jonathan Lucroy of the Los Angeles Angels of Anaheim attempting to score in the eighth inning at Minute Maid Park on July 07, 2019 in Houston, Texas. (Photo by Bob Levey/Getty Images)

After thoroughly reviewing the play from all angles, I have concluded that Jake's actions warrant discipline. While I do not believe that Jake intended to injure Jonathan, the contact he initiated in his attempt to score violated Official Baseball Rule 6.01(1), which is designed to protect catchers from precisely this type of collision.

MLB's home plate collision rule says a runner may not run out of a direct line to the plate in order to initiate contact with any player covering the plate.

The collision happened on July 7. Lucroy had to be carted off the field with a possible concussion and a fractured nose. He is going to be OK.

When reached, Jake Marisnick wasn't ready to discuss MLB's decision to suspend him for two games.  MLB said the suspension would begin Thursday if he didn't appeal.

Jake did say he has reached out to Jonathan.

"I spoke with him after the incident. I told him what I saw. I walked him through what I was seeing. I just hope he's doing good and it sounds like he's doing a little better," Jake said.