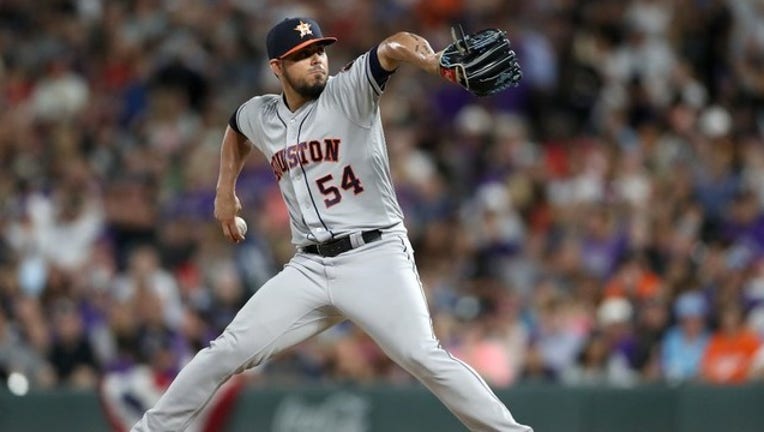 The Astros have won nine of 11, including two of three in this interleague matchup of division leaders.

Dexter Fowler had a pinch-hit homer in the ninth for St. Louis, which lost for the third time in 11 games. The Cardinals fell back into a tie with the Cubs atop the NL Central.

Altuve, who had three hits, including a three-run homer that was his 16th of the season and made it 5-0 in the fifth inning. It was the 1,500th hit of his career - the star second baseman has four homers and eight RBIs over his last eight games.

Wade Miley (9-4) gave up five hits in five shutout innings. He struck out six and walked two in winning his third game since July 3.

Springer hit the second pitch of the game over the left-field wall. It was his seventh leadoff homer of the season and 31st of his career.

Alvarez hit his 12th of the season in the third.

Hudson walked Miley to lead off the fifth. Springer, who had three hits, followed with a double to set up Altuve's homer.

Astros: SS Carlos Correa was back in the starting lineup after getting spiked on the right elbow on a slide by Yairo Munoz at second base in the eighth inning Saturday. Correa left the game in the ninth inning.

Cardinals: Fowler remained out of the starting lineup after fouling a ball off his left foot in Friday's game.

Cardinals: RHP Adam Wainwright (7-7, 4.63) takes on Chicago Cubs RHP Yu Darvish (3-4, 4.54) in the first of a three-game series in St. Louis on Tuesday. The Cardinals are 6-1 in Wainwright's last seven starts against the Cubs.