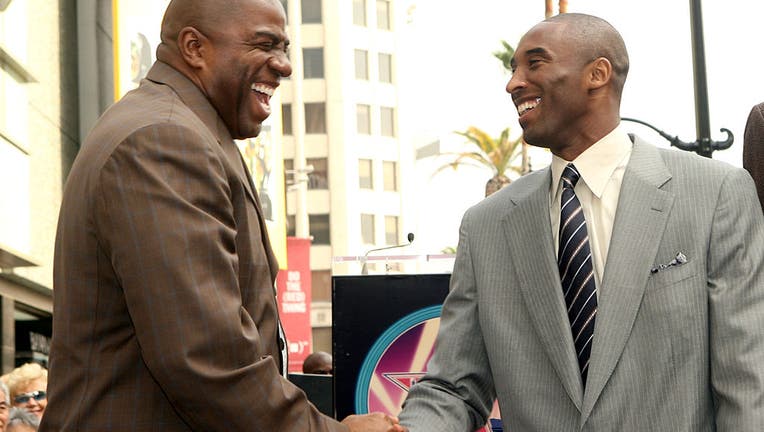 Earvin "Magic" Johnson and Kobe Bryant during Jerry Buss Honored with a Star on the Hollywood Walk of Fame at Hollywood Blvd. in Hollywood, CA, United States. (Photo by M. Phillips/WireImage)

UNCASVILLE, Conn. - From one Los Angeles sports legend to another, Earvin "Magic" Johnson paid tribute to his dear friend Kobe Bryant on social media ahead of Bryant's posthumous Hall of Fame induction ceremony on Saturday writing, "I know you're in heaven celebrating this moment."

Like Bryant, Johnson is also considered one of the greatest Lakers and NBA players of all time.

Los Angeles Lakers legend Kobe Bryant was inducted into the Naismith Basketball Memorial Hall of Fame on Saturday with a touching speech by his wife, Vanessa.

In a series of heartfelt tweets, Johnson wrote the following:

"Congratulations to my dear friend, the late great, Kobe Bryant, his wife Vanessa, his daughters Natalia, Gigi, Bianka and Capri, his parents Joe and Pam, and the entire Bryant family on Kobe’s much deserved induction into the NBA Hall of Fame!

We all are so blessed to have witnessed Kobe’s greatness on and off the court. If he was present at this ceremony, I know he would have dazzled and mesmerized the audience at the HOF and those watching at home with his charisma, wit and intelligence.

We know how he was so competitive and wanted to be better than everyone else. Just like scoring 60 points in the last game of his NBA career, his speech would have been legendary and nobody would have been able to top him.

He was truly one of a kind and we knew this honor was guaranteed. I am genuinely honored to have known him personally as a friend, Laker brother, and an inspiration to so many around the world. Kobe, congratulations on this very befitting honor my friend.

I know you’re in heaven celebrating this moment with the greatest owner in sports history, Dr. Jerry Buss. All of us in Laker Nation will never forget you and we will make sure your legacy lives forever. God bless your soul and may you continue to rest in peace!"

Bryant's wife, Vanessa, gave fans a look inside his Hall of Fame exhibit, along with daughters Natalia, Bianka, and Capri.

The Bryant family also honored Gigi by wearing their Mambacita gear. The funds from the clothing line will benefit the Mamba and Mambacita Sports Foundation.

Vanessa will speak in her late husband's honor and Kobe Bryant will be presented by his childhood inspiration and friend, Michael Jordan.

Kobe and Vanessa's eldest daughter, Natalia, stepped in to don the orange Hall of Fame jacket in her father's honor.