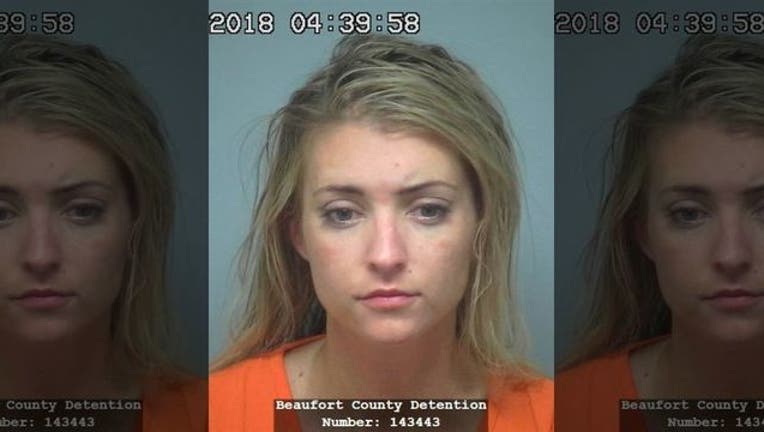 Her eyes glossy and bloodshot, Lauren Elizabeth Cutshaw was slurring her words and a breathalyzer showed her blood-alcohol level at .18 percent, according to police in Bluffton, South Carolina.

But Cutshaw, 32, told the arresting officer she shouldn't be jailed because she was a cheerleader, a dancer and a sorority girl who graduated from a "high accredited university."

Taken to the police station in handcuffs, she described herself as a white "thoroughbred" and "went on to say 'I'm a white, clean girl,'" the officer wrote in his report.

"I asked what that had to do with anything?" wrote the officer, who also is white.

Also, "she repeatedly stated, 'my partner is a cop,'" and said she'd been trying to get to her boyfriend's house when she was pulled over early Saturday.

Cutshaw, a real estate agent, told the officer that she'd had two glasses of wine at The Bluffton Room, an upscale restaurant of gracious service and table-side preparations, its website advertises.

How full were the wine glasses? "I mean I was celebrating my birthday," she replied.

After another officer found marijuana and rolling papers in her car, she said she "may have" smoked pot earlier that evening as well, the report said.

Cutshaw was jailed on charges including drunken driving, speeding and marijuana possession, based in part on her own statements.

"Making statements such as these as a means to justify not being arrested are unusual in my experience as a law enforcement officer and I believe further demonstrate the suspect's level of intoxication," the officer wrote.