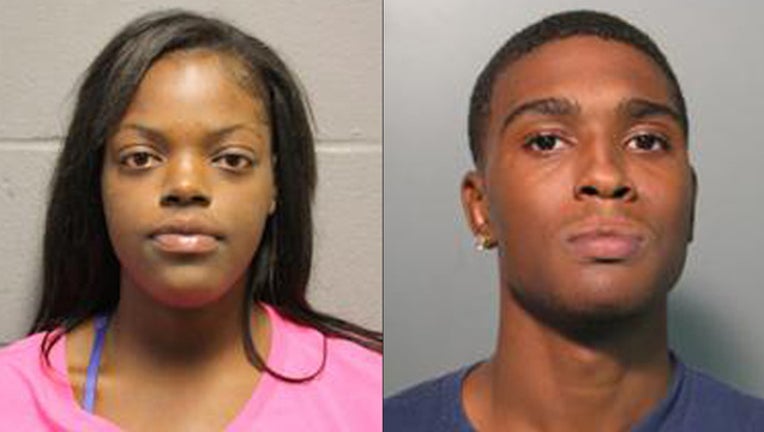 Harris County Sheriff's Office child abuse unit investigators have charged an 18-year-old woman and her 19-year-old boyfriend in the injuries to her 8-month-old child.

Houston Northwest Medical Center staff contacted HCSO investigators on March 14 after they observed the injuries that the child suffered.

Doctors say that Kardea Lockett and her boyfriend, Nicholas Tyler, brought the child to the emergency room after a soft spot had developed on the child's head.

When Lockett provided different versions of what happened to child to doctors, they contacted the investigators. She told investigators that the child had fallen trying to crawl and stand next to a piece of furniture. The injuries were not consistent with that incident.

A CAT scan determined that the child suffered more than twenty forms of fractures, some of which had healed.

When investigators spoke with Tyler and Lockett, they both had inconsistences in their statements as to why the child had so many injuries.

Tyler, who is not the child's biological father, has open warrants and HCSO is seeking help from the public to find him.

Anyone with information about the case is encouraged to contact Crime Stoppers of Houston by phone at 713-222-8477 (TIPS), online by visiting https://www.tipsubmit.com/WebTips.aspx?AgencyID=610, by text message by sending TIP610 and the information to 274637 (CRIMES) or with the Houston Crime Stoppers in the Apple App Store, the Google Play Store and the Blackberry App World. Crime Stoppers is willing to pay up to $5,000 for any information that leads to the filing of felony charges or arrest of the suspect in this case. People who submit information to Crime Stoppers can remain anonymous.