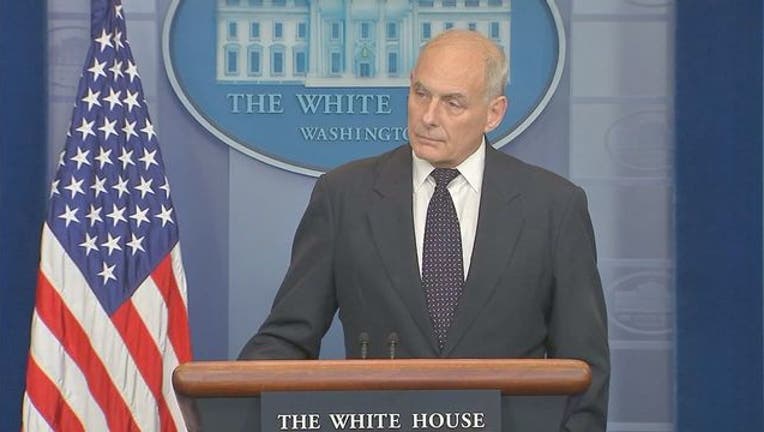 WASHINGTON - (AP) -- White House Chief of Staff John Kelly has for now quieted reports that he will exit the administration, staying on as an increasingly diminished sidekick after his early days as a strong right hand to President Donald Trump.

Kelly told senior aides this week he has agreed to stick around through 2020 at Trump's request, five White House officials said Tuesday. Following months of speculation that the chief of staff was on his way out, the message appeared to be not just about stabilizing Kelly, but also tamping down speculation about staff turnover and projecting calm as the president gears up for his re-election campaign.

The officials spoke on condition of anonymity because they were not authorized to speak publicly about private conversations.

For months, Kelly had told those close to him that his goal was simply to make it to the year mark in his post, a milestone he passed over the weekend. His profile has dropped in recent months, amid reports that Trump had cooled on the retired four-star general who was credited with bringing order to the West Wing but who also was said to grate on the freewheeling president.

Trump is known as a mercurial boss whose feelings on key staffers can shift rapidly.

Tensions between the two men have thawed somewhat in recent weeks. And Kelly began to entertain the idea of staying in the post longer if asked, according to a person familiar with the chief of staff's thinking but not authorized to discuss private conversations.

On Monday, the president tweeted congratulations to Kelly on reaching the one-year mark.

Chafing at Kelly's efforts to impose order, Trump has increasingly followed his own counsel and added more like-minded aides to his staff.

Kelly, for his part, had grown increasingly frustrated in the role over the past year, furious at what he felt was unfair press coverage — particularly about his role in the scandal surrounding former Staff Secretary Rob Porter — while frequently butting heads with the president.

The two strong-willed men clashed repeatedly, with semi-frequent Oval Office shouting matches and speculation that Kelly could quit. A Fox News interview in which Kelly suggested that Trump's thinking on his signature border wall was evolving was an early flash point, followed by the fallout from the Porter controversy. The chief of staff also, at times, had differences with advisers Jared Kushner and Ivanka Trump, wondering what the presidential daughter and son-in-law did all day, one White House official said.

Unwilling to cede control to a powerful chief of staff again, Trump mused aloud to confidants that he might leave the job open, according to the official. But in recent weeks Trump signaled a willingness to retain Kelly in the job, believing that he could simply overrule the chief of staff with little cost.

Kelly has told allies that he feels it his duty to serve even if he and the president differ on style and messaging. While he has not backed away from his assertion that the position is "the hardest job" he'll ever have, Kelly has signaled a willingness to forge ahead in the postition even with diminished clout. He's accepted for himself a more circumscribed role, doing his best to ensure Trump has access to all the information he needs to make decisions.

Kelly has acknowledged that his tenure could end with a single presidential tweet but, keenly aware of his own public perception, has suggested that he believes he can leave a lasting mark on the post and rehabilitate his reputation, one of the White House officials said.

If Kelly stays on into 2019, he'll occupy the role during a re-election cycle, which is likely to downsize what already is a weakened role for him. As a chief with no background in politics, he'll likely be responsible for running White House operations while Trump focuses on his re-election campaign.

News of Kelly's plans to stay was first reported by The Wall Street Journal.

In the past, Trump has been coy about Kelly's role going forward.

Asked in June about the speculation surrounding Kelly's future, Trump said the two were "getting along very well." But he added: "Look, at some point, things happen but I will tell you ... we have a very good relationship. He's a wonderful man."