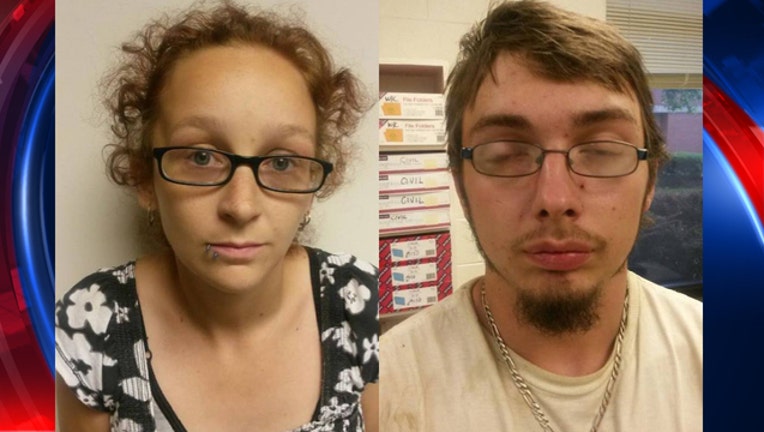 LAYLAND, W. Va. - A West Virginia couple is behind bars after allegedly trying to sell a 3-month-old baby, and they reportedly intended to use the money to buy drugs.

Fayette County sheriff’s deputies say 25-year-old Ashley Harmon and her fiancé, 20-year-old Jonathan Isaac Lucas Flint knocked on the door at a neighbor’s home in Layland, W. Va. on May 28, and tried to sell the baby, who was sick, for between $500 and $1,000. When the neighbor refused, deputies say Harmon and Flint left, leaving the baby behind.

The neighbor later called 911 when the couple did not return, and when EMS crews arrived, she told them the baby had been abandoned. Investigators say the neighbor knew the man, but not the woman. The baby was taken to a hospital, and later placed in foster care.

Deputies say Harmon is the baby’s mother, and she left her home in Greenbrier County on May 26, taking the baby with her but leaving behind two other children under the age of 3.

Deputies say the couple had traveled from the Rupert area of Greenbrier County, leaving behind two other kids under the age of 3.

Harmon and Flint were arrested last week in the Highland Mountain area. They face felony charges including selling or attempting to sell a child and gross child neglect. A judge ordered them held on $100,000 bond each. According to WSAZ, investigators said drugs may have motivated the couple to try and sell the baby.

"Law enforcement officers frequently deal with some pretty strange situations," said Sheriff Steve Kessler. "A situation like this is really out of the ordinary though. We are extremely grateful for the assistance provided to us by the Child Protective Services Workers who worked diligently to insure the health and safety of this innocent infant child and helped us identify and locate the individuals who allegedly attempted to sell this child."

Detectives say the baby’s biological father had nothing to do with what happened, and he had been trying to find the baby. Child Protective Services will determine whether or not the child can be returned to father’s custody.

"It is a sad commentary on the society in which we live that we actually have to codify laws prohibiting the sale or attempted sale of innocent young children," added prosecuting attorney Larry Harrah.